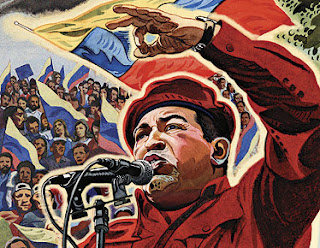 For a long time, I've defended Hugo Chavez. I thought that he was fighting a worthy battle against greed and corruption, against years of foreign domination and cronyism. I thought he was trying to improve the lives of poor people, while establishing a strong economy, an independent and self-respecting nation, and a vibrant democracy.

But now, I'm ready to admit that I was mistaken.

Like many of those who lean left, I figured that Chavez's megalomaniacal governing qualities were a bit unnerving, but not anything serious to be worried about. In retrospect, I realize that I was willing to overlook his authoritarian tendencies because of one main thing: his avowed commitment to social justice issues and his dedication to ending poverty.

The White House plans to use a report next month assessing progress in Iraq to outline a plan for gradual troop reductions beginning next year that would fall far short of the drawdown demanded by Congressional opponents of the war, according to administration and military officials.

One administration official made it clear that the goal of the planned announcement was to counter public pressure for a more rapid reduction and to try to win support for a plan that could keep American involvement in Iraq on “a sustainable footing” at least through the end of the Bush presidency.

Queens, America’s most ethnically diverse county, has just been awarded the top prize as the nation’s busiest library system.

The other night, my wife and I took a young Iranian couple, political exiles awaiting a decision on their application for asylum, to their first baseball game. The Mets lost a close one to the Marlins at what we had renamed for the evening “Shia” Stadium—appropriate for a team that, despite its underdog reputation and history of heartbreaking defeats, has recently been getting stronger. I had given the couple a baseball primer a few nights earlier and rediscovered that it’s the most complicated game in the world: it takes five minutes just to explain tagging up (which I forgot to do, and which turned out to be the key play of the game). They picked things up fast, admiring baseball’s tactical subtlety without fully understanding it, and were riveted by every pitch. But what struck them most was the behavior of the crowd: so pleasant, so good-natured, even after a loss. (I told them that things would have been a little different in the ). In the parking lot, the husband pointed to a row of buses: after the Tabriz-Tehran football match, he said, every one of them would be burned to a shell, and the windshields of most of the cars shattered.

Since 2001, federal agencies collectively have spent an estimated $32 billion on electronic surveillance systems and various other IT initiatives to address bio-defense. . . . Although these individual programs have helped in gathering and reviewing sector-specific data, the federal government has had no single system for consolidating and examining bio-surveillance across federal, state, and local lines.

A new Gallup poll found that Sen. Barack Obama has much higher support among the most educated voters while Sen. Hillary Clinton receives more support from those with a high school diploma or less.

However, while support among educated elites may be responsible in part for Obama’s excellent fundraising, it will not necessarily translate to electoral victory. Gallup points out that in the previous three election cycles the democratic candidate receiving the most support from the most educated -- Howard Dean in 2004, Bill Bradley in 2000, and Bob Kerrey in 1992 -- did not go on to win the party’s nomination (despite a boost in fundraising). The last democrat to win the nomination with similar skewing in support by education was Michael Dukakis in 1988.

Rudy Giuliani desperately wants you to know he’s tough. That he means business. In his foreign policy manifesto manqué in the (heretofore?) august pages of Foreign Affairs, we are repeatedly made to understand, with primitive repetitiveness, that Rudy is the right man at the right time, providentially made available to protect us endangered masses in these most perilous of times. Yes, he gets the threat all right, as the spiritual overseer of the self-declared "9/11 generation," where others, alas, have not learned the lessons of that terrible day.

A Florida jury has awarded damages of $25.8 million to the family of a mother who died following a misfilled prescription by a high school technician at a Florida Walgreens store.

Diebold is dead and gone. Well technically, it's in name only. Brad blog reports the voting machine portion of the company has spun off and been renamed but Brad speculates this is just a prelude to full bankruptcy. One can hope.

I'm not one to wish ill on others, but after years of fraudulently claming the machines are secure, when they are in fact anything but, both physically as a unit and imminently breachable through the software, they should have been put out of business long ago, as in before the 2000 elections.

Australia's Senate overwhelmingly approved a package of bills Friday to fight what the government says is rampant child sexual abuse among Aborigines, clearing the last hurdle for a plan condemned by critics as a racist attack on indigenous rights.