The Price of O.J. & Financial Dysfunction 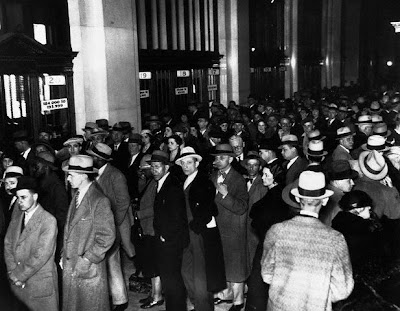 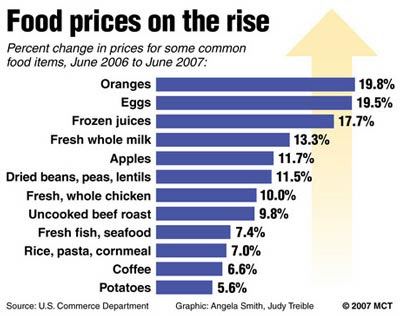 I have nattered endlessly about the disconnect between Wall Street and Main Street and how the talking poofs on MSNBC don't have a clue about the difficult times many Americans are experiencing. Same goes for President Bush, whose daily briefing does not include the price of orange juice.

The graphic, courtesy of McClatchy Newspapers via Kvatch at Blognonymous, speaks volumes. Problem is, the guys in the suits aren't really listening even as the storm clouds in the U.S. financial markets loom larger and there is talk of bank runs (photo).

Ominously notes Lawrence Kudlow at NRO Online (written before the Fed adjusted downward the discount rate to banks on Friday):

"Here’s the story: Last Wednesday, August 8, T-bills traded at 4.49 percent. On Monday they dropped to 4.74. On Tuesday, 4.63. And yesterday they fell to 4 percent. This morning they dropped another 50 basis points to 3.52 percent. What’s this mean? It means the entire banking system has turned completely risk averse and is fleeing into the safest haven possible.

"It is fear. It is hording cash. It is a mountainous tremor that has seized financial markets.

"In terms of funding requirements — for big mortgage banks like Countrywide, or perhaps the major money-center banks and various hedge funds — it shows financial dysfunction."

"It’s worth noting, by the way, that Tony Snow feels compelled to leave his White House job, which pays hi, $168,000 with a sweet benefits package, because he’s running out of money. If a guy can’t get by on $168,000, the economy can’t be that good."

The fed drops its discount rate by a half per cent.
This means that they have offered a lower than would be normal borrowing rate to financial institutions.
This means they are subsidizing the banks' excessive risk taking consequences, now run amok, in the mortgage markets.
Any modestly experienced economist knows that financial institutions go on risky sprees every few years. While these sprees are underway, financial types take a percentage of every transaction. They make the loan; "take a cut." They package the loans; "take a cut." They repackage and repackage the loans. they sell off differentiated pieces, called 'tranches'; losses occur, they repackage the loans and at every turn the bankers slice off a little profit for themselves.
The final result is that the individual bankers have put much dinero in their pockets. The capital position of the banks has hemorrhaged. The Government uses tax money to assist the wounded financial schemers. And John and Jane Doe will have to pay.
When the Does seek a new car loan or other financial resource; the interest will be higher until the capital wreckage caused by the "Known-in-advance" excessive risk behavior of the banks is steadied.

The little guy when in trouble is denied universal health coverage. The Jane Does can't have their interest rate burden lessened or enter bankruptcy without being hammered by the banks. But the financial industry is left to habitually go off on risky tangents, pocket billions, and ask the tax paying public to finance the rescue.
There is an equitable remedy.

Place a one one hundreth of one percent Value Added Tax on all capital flows.
'Them' enrich themselves by taking a bite out of America's capital flows at every instance while 'Us', the creator's of this wealth, need Moms and Dads working multiple jobs to eat and provide the capital for this system.
As our capital washes around the globe for economic enterprises, both good and bad, and hedging and currency (and other asset) speculation, there is no reason Us couldn't charge a way tiny `rent' for this resource.
Social Security and Medicaid could thus be amply funded and capitalism would manifestly not miss a heart beat.
--cognitorex--