(Updated) Thoughts on the Aye-Yai-Phone 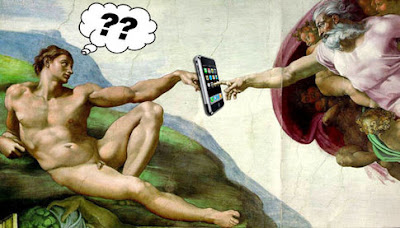 I have read with bemusement the stories of dissatisfied iPhone users.

There have been many accounts of dropped calls, and a guy writing at the Popular Science blog is sending his pricey iPhone back to Apple for repairs for the second time in only a month and a half of ownership.

"Considering all these frustrating weaknesses along with an incredibly high cost of ownership of some fairly buggy hardware, and I'm starting to wonder what kind of revolt lies in store for us when first-gen iPhone users' warranties start to expire come July '08."

Are the problems Mahoney is having typical of a new cell phone model? I dunno, but a device costing 600 smackeroos shouldn’t be so defect prone, in his case first a dead zone on the much vaunted touchscreen and then a dead earpiece speaker.

"Which brings up another point: The various incredibly simple jobs that other phones do well that the iPhone either can't do or does poorly is frankly shameful. Some who bought in to the advance hype might have expected the iPhone to do your laundry (and might be disappointed now to find that it doesn't). But this isn't the kind of thing I'm talking about. I'm talking about sending files to a computer or another phone via Bluetooth; easily texting a picture to a friend or uploading one to Flickr; being able to add your own MP3 ringtones easily (wirelessly, even); or even being able to send a text message to more than one person, for heaven’s sake."

My own cellphone experience speaks to the fact that, above all, a cellphone should be utilitarian.

My first cellphone was an unwieldy AT&T model with a battery pack the size of Ralph Kramden’s lunch box and a handset connected by a thick cord not unlike a contemporary cordless home phone. I dragged this beast around in the mid-1980s, and owing to the limited cellular service in those prehistoric times, could only use it in the metro , and areas.

My next phone was an AT&T Freedom Phone. The monthly bills were anything but liberating, but after the lunch box model it was an improvement. The phone resembled a slightly sculpted brick with an antenna and weighed as much as one. Its range was decent, but it was a bitch to hold after a few minutes. Did wonders for my arm strength, though.

Today I am on my third- or fourth-generation LG, which is not the smallest phone out there but fits comfortably in the palm of my hand and has an easy-to-read screen. It has GPS, but not a camera, a world clock but not Internet access. In other words, it has stuff I use but not stuff that I wouldn’t use.

And it does one thing extremely well and reliably: It receives and makes phone calls. (!!!)

I can use this phone pretty much anywhere and dropped calls are a rarity. And best of all, the cost of the service, which is through Verizon, keeps getting cheaper.

Only a few years ago, the past calling plan for my needs ran me about $200 a month. My current phone cost a minus $15 after rebates and monthly service is less than $50. This is because I keep an eye out for discount calling plan offers and when I find one I like, I have my plan converted.

Then there are the stories about people getting 300-page iPhone bills mailed to them in cardboard boxes.

Or my pal Judi Philly, who signed up for a discount AT&T Internet plan and was billed $490 for the first month.

My Verizon experience may just be dumb luck, although the considerable number of associates and friends who use Verizon also seem to be similarly satisfied.

Which leads me to note that my AT&T experience both with Internet and phone was abominable.

Talk about how the mighty have fallen!

After a litany of issues through the late 90s, I ended up being on a first-name basis with the woman who ran a "secret" consumer complaint office that was a part of the chief executive’s office and obviously intended for radically pissed off people like Yours Truly.

The last straw was the drone in AT&T's billing department who failed to grasp the concept of having a post office box to get mail and a residence to get phone service and swore to me that AT&T could not provide service to a Post Office because it was a government building.

* * * * *
I've got plenty of company in finding AT&T to be an abomination. Writes Natashia Chart at the Booman Tribune:

"AT&T will handicap the BlackBerry 8820 so it doesn't compete with the iPhone. That's pretty obnoxious.

"Hard to say if Apple made the original call, but AT&T has forced RIM to disable GPS functionality on their upcoming release. So if you want the new BlackBerry, don't get it through AT&T. If you have that choice.

AT&T's other odious recent behavior includes censoring political content from a Pearl Jam concert. FCC Commissioner Michael Copps talked recently in this context about the importance of net neutrality, or treating the internet like a telecommunications service with built-in consumer protection.

Sure, now you post this piece about the iPhone, after I traded in my LapTopConnect Plan for the iPhone Data Plan, once I recovered from the unpleasant surprise you mentioned.

Like you, I tend to like my gadgets to perform as intended (cell phone to be cell phone, not prepare dinner too). Up till now, I didn't even mix phone and palm device.

I was going to wait for 2nd generation (and decrease in price) before considering the iPhone, but when I compared cost of service for what I had vs. iPhone, it was worth the switch.