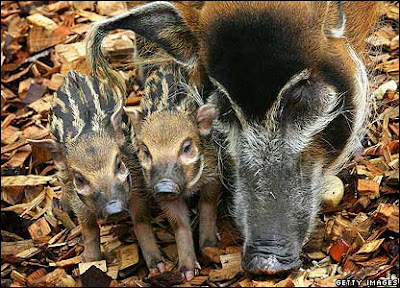 John Warner hasn't committed to seeking another term in Virginia, and if he steps down, this may be the most important thing he's ever done in his life--other than marrying Elizabeth Taylor.

In his bid to win the GOP presidential nomination, Rudy Giuliani has a big problem.

It's true that, as mayor of New York, he was a renowned crime-fighter, and Republican primary voters certainly like a guy who not only has a tough-on-crime image, but also has the tough-on-crime statistics to back up the image. The hitch, however, is that he's the wrong kind of crime-fighter.

Basically, he cut crime in part by curbing access to guns.

Those latter four words are a no-no. While GOP voters like the idea of cutting crime, they're not so wild about the idea of attaching any caveats to the red-blooded American right to purchase a piece...even though, in the case of New York City, those caveats reportedly helped to cut crime.

Former governor Mitt Romney said this week that as president he would allow individual states to keep abortion legal, two weeks after telling a national television audience that he supports a constitutional amendment to ban the procedure nationwide.

With a commanding lead for the Democratic nomination, candidate Clinton is looking ahead for land mines on her road to the White House next fall.

That would explain her out-of-the-blue comment in today about how a terrorist attack would boost Republican chances. She has good reason to worry.

If one 9/11 made it possible for Bush to take us into the wrong war and start chipping away at our civil liberties, what could another do? Even without one, Rudy Giuliani is playing strong man to lead the Republican field, and Fred Thompson will be along any day now to offer his country vanilla version of incipient Fascism.

For the past week I’ve been crouching behind a bush, metaphorically speaking, waiting to ambush Oliver Kamm who was unwise enough to announce his intention to defend the use of the A-bomb at against its moral critics. Of course, I spent some of that time anticipating what Kamm might say and, it turns out, I anticipated wrongly. I had expected Kamm to concede, against people like Elizabeth Anscombe, that involved the murder of innocents, but then to argue that such murder was necessary. I’d then intended to invoke Orwell’s critique of Auden from Inside the Whale, a passage that contains inter alia, some acute comments on the Kamm mentality.

But I was wrong. It turns out that Kamm denies the claim that it was murder . The trouble is, he can’t bring himself to face the issue directly, and, despite quoting Anscombe in extenso, gives a seriously inaccurate account of her view.

I recently visited the British museum for the first time. The very little I saw really was astonishing. I found it surprisingly moving, in fact – especially the Rosetta Stone, for whatever reason. But despite the sense of amazement, I also had the gnawing and depressing feeling that the last 3500 years of human history really just boils down to one damn war after another. Another (related) feeling was the more inchoate discomfort with how all that stuff managed to arrive in .

A 17-year-old hacker has broken the lock that ties Apple's iPhone to AT&T's wireless network, freeing the most hyped cell phone ever for use on the networks of other carriers, including overseas ones.

George Hotz of Glen Rock, N.J., confirmed Friday that he had unlocked an iPhone and was using it on T-Mobile's network, the only major U.S. carrier apart from AT&T that is compatible with the iPhone's cellular technology. In a video posted to his blog, he holds an iPhone that displays "T-Mobile" as the carrier.

While the possibility of switching from AT&T to T-Mobile may not be a major development for U.S. consumers, it opens up the iPhone for use on the networks of overseas carriers.

Photograph by Getty Images
Posted by Shaun Mullen at 5:00 AM
Email ThisBlogThis!Share to TwitterShare to FacebookShare to Pinterest