Guest Blog: A Warrior Loves Peace More Than Anything. Then There's Steven Green 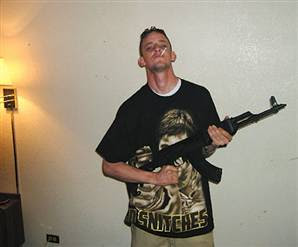 STEVEN GREEN
On Monday, I revisited the tragic story of Abeer Qassim Hamza, the 13-year-old Iraqi girl who was repeatedly raped and along with her parents and sister, murdered by a posse of U.S. soldiers led by Private First Class Steven Green, a 21-year-old boy-man with homicidal tendencies and a criminal record of which the Army was well aware.

My commentary got a fair number of initial hits, but like the waves emanating out from a pebble tossed into a pond, it has gotten more and more day by day.

Because of the interest in what I unabashedly offer is one of the more visceral accounts of the horrors visited upon Abeer and her family, as well as the enormous stress that our fighting men and women have been put under in this awful war, I turned to friend and colleague Dr. Clarissa Pinkola Estés, the renowned psychoanalyst and author, for her take on Green and what can happen to men and women at arms.

The military has lagged in informing soldiers in any depth about what psychological, spiritual and physical changes they will go through during and after war.

OSHA does a better job of informing workers of potential hazards to their health than the military does, although there is no soldier who is ordered to a war zone who is the same afterward. Some are stronger, many wiser and most try hard to find the best way to adapt to being back home again. For some, their minds are never the same when they return. Fewer still never had a sane mind to begin with.

Psychologically and spiritually, there are many kinds of soldiers. These are some of them:

* There are soldiers who go to war because they are ordered to do so, and have taken a good-faith oath that they will serve if called.

These are most often reservists. Sometimes they are officers who were in ROTC at university. Most of the soldiers in this group are certifiably sane with no more than the usual garden-variety issues in life before they were deployed. They did not enlist because they were failures or because they had an ill hunger for war. Most truly serve.

* There are soldiers who go to war whose minds and bodies suffer from what they see, hear, smell and face, as well as from what they do and what is done.

Most will need mediation of mental and spiritual health issues during their deployment and when they return. Be wary of the soldier who claims to have not been affected by war, but most soldiers in this group still have a healthy core that can be drawn on to heal themselves. Still, they must not be depleted by making their 1,000-horsepower selves do the work of a 2,000-horsepower engine until it shimmies to pieces.

* There are soldiers who go to war and are kept overlong on patrol and in battle.

The body, mind and soul can only take so much. This group of battle fatigued or torn soldiers, call them what you like, are out of balance. Their judgment may especially be affected, just as ours is when we are fatigued beyond belief by a life or death matter in our own lives.

* There are soldiers who go to war who already were on edge behaviorally, mentally, morally and spiritually before enlisting.

Serving in the military may be, in a sense, the most cohesive thing they have ever done and strengthens and matures them. These soldiers may belong to one of the other groups, as well.

* There are soldiers who go to war who become grievously sorrowful or grievously enraged from seeing loss of life, from thinking that they are being used, and from seeing how good can be destroyed by evil in an instant.

A very small percentage of this group may vent in ways that are out of character and they explode in a transient rage. Lieutenant William Calley and his troops at My Lai may have been an example of this. Rage jumps like fire from man to man without thought in such situations. What was a unit becomes a mob, and often afterward these soldiers are beside themselves with grief over what they have just done that is so outside their own moral and spiritual order.

* There are the very few soldiers who go to war who do harm -- as well as talk about doing harm, think up shocking ways to do harm, enveigle others to join them in doing harm, and concoct false stories so others will be outraged and join in doing the harm -- because they are aroused from and get deep pleasure as a result of their actions.

Their acts stun us because the purity of their evil is stunning. Evil can walk and talk and joke and eat pizza. And laugh at the sound of the tearing flesh between the legs of a 13-year-old girl. The psychopath's M.O. is to create targets for destruction deemed worthy of torture and slaughter. These are not men. These are demons who have eaten a man, and all that is left is the malignant mind of a force that we have few words for. In criminal justice parlance, this soldier is called a murderer. In psychology, he is called a psychopath. In religion, he is called possessed.

* * * * *
Which of these Mr. Green might be, I do not know. But as a military wife for 20 years and as a psychoanalyst and post-trauma specialist for 37 years, I do know that sending a man who professes an inordinate desire to kill others into the high-pressure situations of war who has a desire for blood excitement and power over helpless others endangers any Iraqi who crosses his path. This is because they will be projected upon as “deserving punishment,” as well as endangering his fellow and sister soldiers.

This is a soldier who will blow away an officer because he is enraged at some petty or imagined slight or challenge; blow away his comrades just because he felt them to be in his way, and blow away others just because he needs their blood to achieve his own kind of sexual arousal.

No one is safe in the presence of a psychopath. Ted Bundy, the murderer of hundreds of young women, escaped arrest many times. He was a man who was charming on the surface but had a blood lust for torture and murder that could not be quieted with medicine, being given a talking to, or by being threatened with loss of freedom.

Today homicidal and psychopathic individuals are considered to have an organic disorder that no talking cure will dent. They typically are wily and cunning and often will say exactly what one wants to hear whilst going behind the scenes and creating mayhem. They are pathological liars; they literally seem not to be able to distinguish truth from falsehood.

These men are unleashed demons feasting on blood and bones and praying that what for others is a nightmare will never end. They are very different from another kind of soldier: Those who are trained to kill, whose motive is first and foremost and in the final analysis, as well, to bring an end to war using the least means possible but using the most means if necessary.

There is saying about these soldiers: A warrior loves peace more than anything.

Simply brilliant. I am most familiar with her work and adore her. Thanks for this thought provoking and informative post.

Which, I will once again paste upon the pages of my own blog.

Thanks for your great writing and tremendous insight.