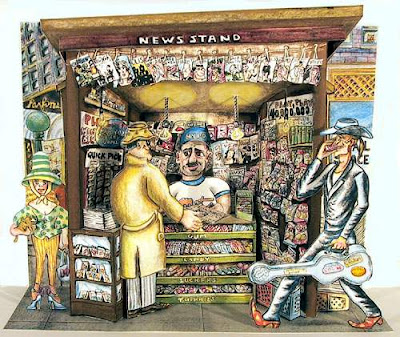 If you force the telcos to build in complex technology that let's you selectively, and at will, intercept the communications of anyone you feel like, the phreakers will learn how to exploit it for themselves.

If you force ISPs and businesses to consolidate records of all transactions, all sites surfed, and all emails sent, hackers will break the databases, sell the information to spammers, and then . . . well . . . you ain't seen nothing yet phishing-wise.

If you build in all these centralized vulnerabilities and the hackers have learned how to exploit them, their methods will be available to terrorists, and you know what happens then?

The Aug. 13 editorial "English, Sí?" used the wrong word in Spanish for "population." The correct word is población.

I love Jimmy Justice, the guy who wanders the streets of New York videotaping traffic cops who are violating the traffic laws they are supposed to enforce and confronting them with their sins. This is the power of the people, armed with their own cameras and the internet, acting as watchdogs on government. Isn’t that journalism?

Contrary to the chipper spin from publishers that online readership is growing robustly, the traffic at most newspaper websites has been flat – or worse – for the last year, according to a new report from .

In a study of 160 newspapers, the on the Press, Politics and Public Policy found that the “record” readership gains heralded by the industry were produced almost entirely by the New York Times, Washington Post and USA Today, where traffic on average rose “more than 10%” in the last year.

Steven Seagal has had a strange odyssey through . He exploded on the scene in 1988, in his self-produced Above the Law after six years of serving as a martial-arts consultant in films. Seagal made a string of largely similar films over the next fifteen years, usually with names that fit "Steven Seagal Is --" above the title, such as "Steven Seagal Is -- Out For Justice!" Most of these films were self-produced, and most of them featured a martial-arts master delivering justice in his own very special way.

Eventually, audiences found other action films and stars, leaving Seagal behind. However, Seagal contends that the real murderer of his career isn't changing tastes or even the butler, but the FBI.

An article in the House & Home section on July 26 about Janna Bullock, a renovator and developer of townhouses, reported that one of the owners of a house she had bought on tried to set it on fire on the day of the closing. (Although the owner was not named, the address of the house was given in a caption.)

The sources of this characterization of the owner’s actions on closing day did not see what happened themselves, but said two others did. The Times did not ask the owner for his version, or check with those who saw him in the house that day. The owner denies doing anything that could be construed as trying to set the house on fire, and the two eyewitnesses do not contradict him.

The unverified assertion should not have been in the article.

At least 170 subscribers to the Wall Street Journal have canceled their orders since word emerged that Rupert Murdoch's News Corp. will soon take over the newspaper. The paper does have 1.7 million print subscribers left.

Sometimes it's a good idea to check back and see just how accurately Fox News' business experts predict the economic future. Here are a couple of clips from the July 21, 2007 edition of Bulls & Bears and Forbes on Fox in which all but three analysts make incorrect predictions about the stock market. The rest, including Steve Forbes, painted an overly rosy picture of future stock market activity, one of them even predicting Dow 18,000! Naturally, there were the usual digs at the Democrats, including Tobin Smith's mocking mispronunciation of the word "moron" and Steve Forbes' blatant politicking on behalf of Rudy Giuliani. If this is an example of the level of business analysis on Fox News, heaven help anyone who watches the upcoming Fox Business Channel!

A 13 year-old boy in Finland might have a promising career as a fact checker ahead of him.

Last week he revealed that the image of a submarine used by state-owned Russian TV network Rossiya (RTR) to illustrate a story about a Russian submarine voyage to the arctic was in fact from the film Titanic.

The ads promoting “Kid Nation,” a new reality show coming to CBS next month, extol the incredible experience of a group of 40 children, ages 8 to 15, who built a sort of idealistic society in a New Mexico ghost town, free of adults. For 40 days the children cooked their own meals, cleaned their own outhouses, formed a government and ran their own businesses, all without adult intervention or participation.

To at least one parent of a participant, who wrote a letter of complaint to New Mexico state officials after the show had completed production, the experience bordered on abuse and neglect. Several children required medical attention after drinking bleach that had been left in an unmarked soda bottle, according to both the parent and CBS. One 11-year-old girl burned her face with splattered grease while cooking.

A photograph appearing to confirm that a great white shark was lurking in waters just off was today exposed as a fake.

The man who took the picture, which was featured prominently in the Sun, admitted he had snapped the creature during a fishing trip in rather than off Newquay, northern .

Image: "Extra, Extra, Read All About It" by Red Grooms