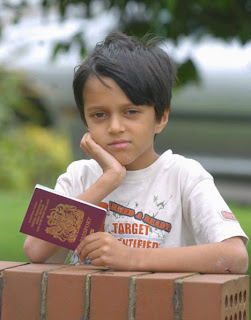 If you, like me, have the impression that the global effort to keep terrorists from boarding jetliners has a Keystone Kops kwality about it, I refer you to the saga of Javaid Iqbal.

Javaid, the seven-year-old son of Naushaba Nadeem, a doctor, was rewarded by his mom for doing well at school with a trip to Disney World and other attractions in .

But the Muslim boy was left in tears and his mother and three siblings utterly frustrated when the youngster was stopped at airports in in and and in the on suspicion of being a terrorist.

The security alerts were triggered because Javaid shares the same name with a Pakistani man who was not a terrorist but was deported from the .

Security workers at the airports were unable to balance being cautious with the reality that a youngster traveling with a family that passes muster does not fit the profile of a terrorist just because his name is the same as an individual many years his senior. In other words, they acted like drones.

Javaid's passport now contains a sticker saying he has undergone high-level security checks, but he says he's traumatized by the experience and doesn’t want to fly to again.

His parents say they are considering changing his name.