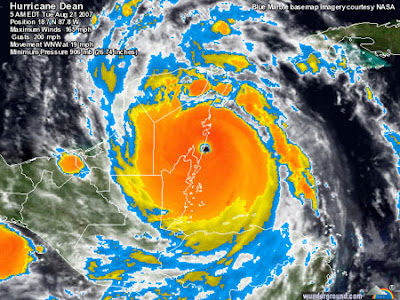 Hurricane Dean, a Catagory 5 as it made Yucatan landfall on Tuesday.

The global warming police – as well as the deniers – are out in force in the wake of mighty Hurricane Dean’s march across the Caribbean and ’s .

Dean has put up some impressive numbers:

It is one of the 10 most intense Atlantic hurricanes of the last century. It is the first Category 5 hurricane in 25 years to make landfall in the Atlantic basin. There were sustained winds of 165 miles an hour and gusts to 200 mph when it made landfall in . Some areas got upwards of 20 inches of rain.

Millibars tell you more about the "soul" of a hurricane than its size, speed and position. At 906 millibars, Dean’s central pressure was a frightening thing to behold as the ninth lowest ever measured in the Atlantic. (By comparison, Katrina measured 902 millibars when it made landfall on the U.S. Gulf Coast nearly two years ago.)

The Mexican news media dubbed the storm "El Gigante" -- the giant – but it roared across the Yucatan well south of Cancun’s tourist center, damage was less than feared and the overall death toll appears to be fewer than 20 people during its three-day rampage in the Caribbean. Incredibly, no deaths have been reported in Mexico as of this writing.

(Dean will make final landfall in the Mexican state of on the today and could cause heavy rains that could bring flash floods to mountainous areas.)

But the blessing of relatively few casualties aside, global warming believers note that six of the 10 strongest Atlantic hurricanes (Ivan, Katrina, Mitch, Rita and Wilma, in addition to Dean) have been in the last 10 years and it is obvious, says hurricane expert Chris Mooney, that there are more super hurricanes out there than ever before and only a fool would reject out of hand the possibility that global warming is playing a role.

This is the part of the movie where I note that global warming deniers – with the Bush administration in the van -- are indeed fools.

The parameters of and all of the factors that may go into the warming trend of the last several decades, as well as what will happen in coming decades, is legitimately open to debate. But what is not in question is that something very serious is going on that is the result of the hand of man and not cow farts.


Only a fool would fail to acknowledge that a continuing increase in global temperatures will cause a sea level rise and glacier retreat and change storm and precipitation patterns in ways that will affect agriculture, the extinction of species and increase in diseases, and that something needs to be done about that ASAP.

"To be sure, there's a counterargument here: Data wasn’t as good on hurricane intensity in previous eras as it is today, when our measuring equipment is better than ever. Stronger storms may well have existed in the past, but we were simply incapable of detecting their true strength.

"This is a serious objection, although it’s hard to know precisely how serious. Nevertheless, the fact remains that if you look at the official records, Dean now fits in to a staggering hurricane decade. That’s highly suggestive, if not definitive. And this staggering decade has occurred in part because of anomalously warm ocean temperatures in the hurricane-prone regions. Many scientists question whether you can explain these warm anomalies without invoking global warming as at least part of the cause."

Among the deniers are P.J. Gladnick, who "exposes and combats liberal media bias" at NewsBusters, and accuses Mooney of playing "the blame game" without offering a shred of evidence to counter Mooney’s carefully argued take on hurricane trends and global warming.

By this person’s lights, that makes Dean a vast liberal conspiracy. And a really wet one.

Only a fool would fail to acknowledge... - You've said it Shaun.