Iraq Troop Levels: Something's Got to Give 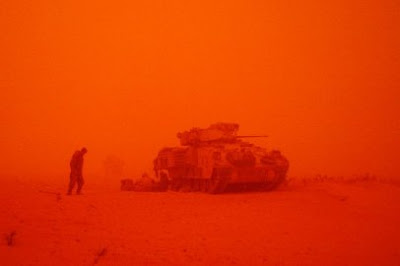 Some active-duty commanders and a fair number of retired ones have been warning for some time that a protracted war is slowly but inextricably bringing the Army to its knees because of the physical and emotional demands that it is putting on its soldiers as well as the Pentagon's inability to quickly replace damaged and destroyed vehicles and materiel.

These soldiers typically are serving 15 months in with less than a year at home between tours. Some units have been deployed to the war zone three times in the four-plus year war that has yet to turn the corner and could rage on for years to come.

The situation has become so tenuous that in a rare public rebuke, newly minted Army Secretary Pete Geren warned this week that he would refuse to extent duty tours to 18 months, as some commanders have suggested. He argued that extended tours have put too much stress on soldiers and their families and have contributed to an increase in suicides.

Geren is but one player in a looming confrontation between those who want to build on the modest successes of the surge and keep present troop levels, which probably would require extending duty tours beyond 15 months, and those who are concerned about the longer-term viability of a fighting force that is stretched so thin that it could not realistically fight another action elsewhere in the world, let alone a full-blown war, if called upon to do so.

Overlaying this confrontation are the political considerations that have driven the war from the outset.

In the wake of the so-called Democratic mandate following the mid-term election, the political clock had begun outrunning the military clock, calls for commencing a drawdown of troops had grown louder and more insistent, and Republican legislators had begun abandoning the president in small but nevertheless significant numbers.

But the modest successes of the surge – and they are only modest and only temporary because there have never been enough troops and no concomitant progress toward political reconciliation – have given President Bush and General David Petraeus, the top commander in Iraq, some breathing room at least until Petraeus and Ambassador Ryan Crocker deliver their much-anticipated progress report to Congress on September 11.

Among those calling for a reduction in the Iraq force of up to half of the 20 combat brigades now in country are General Peter Pace, chairman of the Joint Chiefs of Staff, and General George W. Casey Jr., the Army chief of staff. Both have been scapegoated by the White House for the lack of progress in Iraq in an effort to deflect criticism from where it belongs -- the Oval Office. Pace at one time was a shoo-in to be reconfirmed as chairman, but a successor already has been chosen, while Casey was replaced by Petraeus in January.

"We're consumed with meeting the current demands and we're unable to provide ready forces as rapidly as we would like for other contingencies. This is a temporary state and one we must pass through quickly if we're going to preserve and sustain our all-volunteer force and restore strategic depth."

The Wall Street Journal reported this week that Casey has forged close ties with Defense Secretary Robert Gates, who was brought on the scene after Defense Secretary Donald Rumsfeld was forced out in yet another transparent effort to deflect criticism from the president.

The troop-level debate is healthy and stands in sharp contrast to the run up to and early years of the war when the president and defense secretary brooked no dissent. It is a sign of the president's weakness that the debate is so public.

It also is no small irony that the troop withdrawal plan that Gates is said to favor is modeled on a plan Casey proposed two years ago to cut the number of combat brigades in half. But that was when Bush, coming off of his re-election victory, and Rumsfeld were still deeply in denial about the disastrous course of the war.


In any event, any withdrawal plan presumes that Iraqi army and security forces will be able to fend for themselves when a U.S. troop drawdown does commence and there will have been gains on the political front. Both presumptions are highly questionable.

Finally, there is the matter of public support, which has shown a modest uptick because of the modest successes of the surge.

I do not believe that those successes can be built on without parallel gains on the political front. That is not going to happen even if the U.S. installs another puppet to replace embattled and embittered Prime Minister Nouri al-Maliki, so it is only a matter of time before the surge is history and public support further erodes.

Something does indeed have to give.
Posted by Shaun Mullen at 7:01 AM
Email ThisBlogThis!Share to TwitterShare to FacebookShare to Pinterest