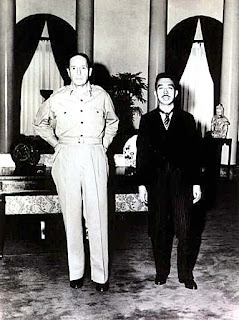 While George Bush has squandered his legacy on the war, scholars feasting on the carcass of his tenure will have a field day recalling his serial distortions of history -- efforts to justify failed policies and reckless actions.

Presidents and other leaders have cited historical events since time in memoriam to state their cases, but usually with a bit more care than the fecklessly reckless Mr. Bush.

I find especially execrable Bush's frequent comparisons of the war to World War II and himself to Harry Truman. Then there is his current lip lock with the Vietnam War and the passel of false analogies that he uses to invoke that disaster as a reason for prolonging his disaster.

Well, Bush’s speechwriters have now hit the bottom of the barrel of false historic analogies. In a distortion of the record stunning even by the president's low standards, he invoked an unnamed historian in a speech last week to argue that critics of the war echo those who questioned the 's effort to bring democracy to after World War II.

This assertion is so inaccurate that it beggars belief, and the historian – the esteemed John Dower of MIT – was quick to say so.

Beyond Dower's push back and the historic record itself, I can attest to the falseness of the analogy from personal knowledge.

While Bush was avoiding the Vietnam War (yes, that one) by sometimes showing up for Air National Guard drills in Texas and Alabama, I was covering said war with Tokyo as my home base. I arrived in Japan a mere 18 years after it had again become an independent nation. Memories of the American occupation were quite fresh among the Japanese and foreign ex-pats with whom I worked and socialized, and I got to know a Japanese woman who was deeply involved in the planning of revisions to the Japanese constitution because of her pre-war Oxford education and fluency in English.

There was a small faction of post-war planners who did indeed poo-poo the notion of installing American-style democracy in . There also was substantial debate about whether Emperor Hirohito (in photo with General Douglas MacArthur) should be tried as the war criminal that he was. But it had been assumed from the outset of planning for the occupation, which was well before the end of the war, that would be a constitutionally democracy.

In 1946, the Japanese Diet ratified a new Constitution of Japan which followed closely a model copy prepared by the occupation authorities with the help of my friend, and it was promulgated as an amendment to the old Prussian-style Meiji Constitution. The new constitution guaranteed basic freedoms and civil liberties, gave women the right to vote, abolished Shinto as a state religion and abolished the nobility. Most importantly and controversially, the emperor was designated as the symbol of but was removed from the political process.

Meanwhile, the occupation of and could not be more different.

The esteemed John Dower of MIT also said that Bush's speech, as so many before, was an exercise in propaganda. Propaganda is propaganda, it encompasses lying and it rarely employs truth to meet its ends was clearly inherent in Professor Dower's opinion of the speech and this administration.
Personally, I think, that according to Rovian propaganda dictates, these users believe that all older Vets are syncopatically inclined to frown, growl and nod their heads at anyone who repeatedly intones names of wars.
Vietnam! WWtwo!!Korea!!
Vietnam!! Korea WWII.
These are truly bad people with no respect for our vets service or intelligence.
--cognitorex--