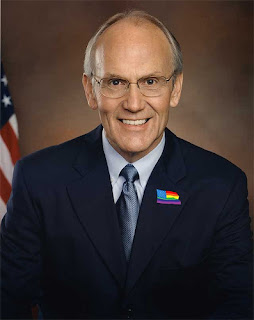 It's time to ask yet again why it is that Republican politicians seem to get caught doing naughty things much more than Democrats?


That's tough to answer, but we have yet another case of a closeted gay in a political party that officially loathes them.

The latest nominee to the GOP Hall of Closeted Pols is Larry Craig of . . . er, , as smarmy and self righteous a conservative prig U.S. senator who has ever been caught trying to solicit sex from a guy in the airport.

Which is exactly what Craig appears to have done despite his protestations, including a wonderfully wacked out statement that he spreads his feet really far apart when he pees and didn’t mean to tap the foot of the undercover officer one toilet stall over.

By the way, Craig has pleaded guilty, although he later said he didn't mean to do so.

It has been rumored for years that Craig is as gay as Dick's hatband, to use one of my dear departed gay friend's favorite terms, but that would be anathema in conservative .

No less a loyalist than Hugh Hewitt, the hack Republican broadcaster, has called on Craig to resign:

"I realize that I did not say this about Senator Vitter, but Craig’s behavior is so reckless and repulsive that an immediate exit is required. . . . I don’t believe him. Read the statement by the arresting officer. He must think the people of Idaho are idiots. But even if I did believe him, this would make his judgment too flawed to be in the United States Senate in a time of war. He has to go."

Craig joins other recent nominees to the hall, including Glenn Murphy Jr. and Bob Allen, with a special kudo to Michael Flory, who was nominated for entry into the Non-Consensual Sexual Assault wing of the hall.


Tittering aside, neither political party has a monopoly on virtue, but as Steve Benen notes at The Carpetbagger Report:

"If we were to go back over the last few decades and do a tally on which side — left or right — had more high-profile sex scandals, I have a hunch it’d be about even. The difference, however, is that only one side claims the moral high-ground, holds itself out as the arbiter of virtue, is quick to judge moral/sexual failings in others, and wants desperately to use the power of the state to regulate (and ban) some of the behavior they personally engage in."

Posted by Shaun Mullen at 4:24 AM
Email ThisBlogThis!Share to TwitterShare to FacebookShare to Pinterest

Kudos for the use of "trying to solicit". Yours is the first posting, or even MSM news report that did report this fact. I am troubled that this gets little mention, nowhere do I read about any conversation between the parties involved in the incident. Everyone seems to go with exaggerating an ugly story into something more.