Pardon Me, But Your Partition Is Showing 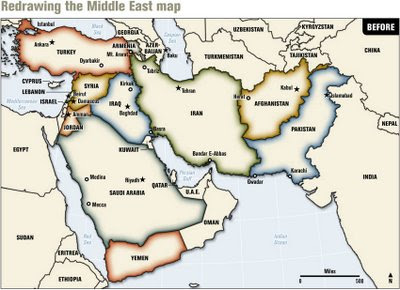 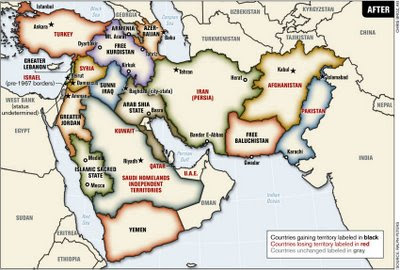 The Peters Principle: Partition taken to a regional and logical end
Like a bad penny that keeps turning up, partitioning into three ethnic mini-states in order to save it is back in the news.

While partition as an alternative to the bloody status quo has appeal and seems to have worked semi splendidly in , is not . As Thom Shanker notes in The New York Times, the two countries could not be more different:

* The war in had already rendered that country divided and the successor states created by partition were ethnically homogeneous, whereas in there would have to be massive population resettlement. (Involuntary resettlement is occurring, and this has apparently increased as a consequence of the surge.)

* War-weariness among combatants and non-combatants like contributed to the Bosnian armistice, but Iraqi militias and insurgents show no signs of wanting to lay down their arms.

* Outside powers supporting Serbian and Croatian militants were part of the Dayton Accords process, whereas the Bush administration has been much too reticent to involve and in such talks to allow a Dayton-like solution.

"The missing ingredient is relevance. Unlike Bosniaks, Serbs, and Croats, who did not have the quotidian political autonomy before the war that granted them, 's 18 governorates already have autonomy to handle community policing, education, religious and cultural practice, and the ever-so-important 'breathing room.' The Biden/Gelb approach to 'soft partition' doesn't lower obstacles to autonomy, it only raises obstacles to cooperation on those things that Messrs. Biden and Gelb still expect Iraqis to sort out together: national defense, oil revenue sharing, and other matters of 'mutual interest.' "

As it is, 's borders are substantially a result of a secret partition between the British and French in 1916 that had nothing to do with historic or sectarian considerations and everything to do with staking out spheres of post-World War I influence. The partition is recognized as a turning point in relations between the West and Arab peoples, which is to say that it has pretty much been all downhill since.

In fact, a major reason the is such a screwed up place is that the borders of several other countries also were drawn by self interested Brits and Frenchmen who didn't give a fig about historic ethnic, tribal and religious considerations. just happens to be Exhibit A in that regard.

About this time last year, Ralph Peters wrote a fascinating article in the Armed Forces Journal with accompanying maps (reproduced above) that redraw the region's borders to more closely reflect those considerations.

The first thing you notice is that , which is at the heart of the region and in some respects at the heart of its dysfunctionality, shrinks somewhat. , on the other hand, is chopped up into Shia, Sunni and Kurdish states and ceases to exist, while returns to its pre-1967 war borders.

So why doesn't take a bigger hit?

Peters explains that it is a state with "madcap" boundaries. It would lose a great deal of territory to Unified Azerbaijan, Free Kurdistan, the Arab Shia State and Free Baluchistan, but would gain the provinces around Herat in today's Afghanistan — a region with a historical and linguistic affinity for Persia. would, in effect, become an ethnic Persian state again.

Peters concludes by noting that correcting borders to reflect the will of the people may be impossible in the short term:

"But given time — and the inevitable attendant bloodshed — new and natural borders will emerge. has fallen more than once. . . .

"From the world's oversupply of terrorists to its paucity of energy supplies, the current deformations of the Middle East promise a worsening, not an improving, situation. In a region where only the worst aspects of nationalism ever took hold and where the most debased aspects of religion threaten to dominate a disappointed faith, the , its allies and, above all, our armed forces can look for crises without end. While may provide a counterexample of hope — if we do not quit its soil prematurely — the rest of this vast region offers worsening problems on almost every front.

"If the borders of the greater cannot be amended to reflect the natural ties of blood and faith, we may take it as an article of faith that a portion of the bloodshed in the region will continue to be our own."