Iraq Progress Report: The Back Story 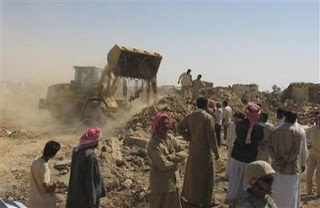 The back story to the long-awaited progress report to be delivered next month by General David Petraeus keeps getting fascinatinger and fascinatinger.

First we learned – and certainly not from the White House – that despite President Bush's repeated statements that the report will reflect evaluations by Petraeus and Ryan Crocker, the ambassador to , it will be written by the White House.

Now comes word that the White House wants the report to be delivered to Congress by the secretaries of state and defense, with Petraeus and Crocker giving private congressional briefings.

So it's okay for Petraeus to go on Faux News, but not appear before a televised session of Congress.

Mind you, this is all of a piece – the Bush administration's pathological inability to level with the American people about anything -- and even the war even when there may be some good news to report. And yet another insult to the families whose sons and daughters who are in Iraq, as well as those who have made the ultimate sacrifice.

Bushco is furiously spinning the suicide bomb attacks (see photo) in northern Iraq that took the lives of at least 400 Kurds as the work of Al Qaeda, which it says can no longer operate in Baghdad because of the success of the surge.

First of all, no evidence has been provided that Al Qaeda is the culprit. Secondly, Cockburn correctly notes that suicide bomb attacks in the capital actually have gone up:

"In reality, the number of car bombings in in July was 5 per cent higher than last December and civilian casualties in explosions have increased by about the same percentage."