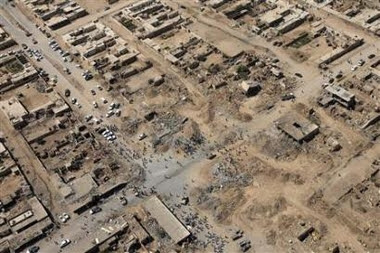 IT TAKES A VILLAGE

There has been a breakthrough in the political logjam in Iraq.

The Associated Press reports that:

"Iraq’s political leaders emerged Thursday from three days of crisis talks with a new alliance that seeks to save the crumbling U.S.-backed government."

But wait a goshdarned minute: The reshaped power bloc includes no Sunnis.

In other news in the run-up to the breathlessly awaited progress report to be given or not given in public or not in public by General David Petraeus:

* Although it comes as a shock because of how forthright the Bush administration has been, a majority of Americans don't trust Petraeus's upcoming report and even if they did, it wouldn't change their mind, according to a new poll.

* The death toll in the horrific suicide bombings in northern Iraq (see photo) passed 400, making them the deadliest coordinated attack since 9/11.

* The Shiite takeover of the Iraqi army seems to be just about complete, which may explain why Moqtada al-Sadr has been on his best behavior lately.

* As expected, the situation in Basra in southern Iraq continues to deteriorate, although the black gold flows by the black-market barrelful amidst the power vacuum left by the drawdown of British troops.

* Some Iraqi women are being driven to prostitution to feed their children because the cost of living has gone through the roof as a result of the war.

* For years, the U.S. brass has warned that soldiers' blogs could pose a security threat by leaking sensitive information, but a series of online audits conducted by the Army, suggests that official Defense Department websites post far more potentially harmful info than blogs do.

Photograph by Agence France Press
Posted by Shaun Mullen at 5:40 AM
Email ThisBlogThis!Share to TwitterShare to FacebookShare to Pinterest