What a Difference a Month Makes. Or Does It? 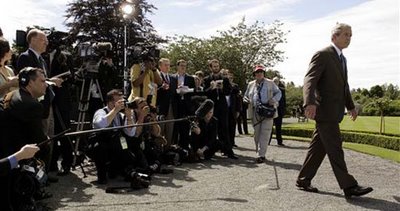 On November 7, voters reputiated the Republican majority in Congress and rebuked The Decider for the Mess in Mesopotamia. Since then, there has been a steady drumbeat of bad news from and about Iraq, including the defection of leading neoconservatives from The Decider's camp and the long overdue sacking of Defense Secretary Rumsfeld. Then came the Iraq Study Group report, which while flawed and outdated given the rapidly accelerating collapse of Iraq, was an indictment of a failed presidency.

What a difference a month makes. Or does it?

The ink was barely dry on the ISG report when The Decider, humiliated but as stubborn as ever, refused to take the political cover that it provided and defiantly declared that nothing short of victory in Iraq was acceptable.

This is the part of the movie when I have to pause and ask where this guy is getting advice these days. Who is telling him to paint himself into an ever tighter corner? Or is he walking the White House corridors late at night muttering to the paintings as Richard Nixon did when his presidency was collapsing?

Is The Decider on autopilot?

Is this behavior the product of some strange Rovian strategy?