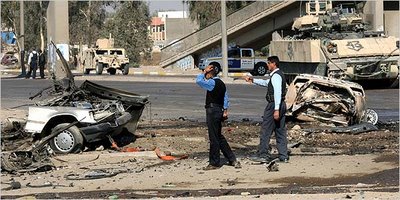 The first thing to be said about the Iraq Study Group's report is that it is anticlimactic.

That is not a bad thing. Although the bipartisan group worked behind closed doors, its high profile but low key chairman, James Baker, gave it a very public face and there wasn't any doubt about what its recommendations would be.

The second thing to be said is that although the ISG's report is being described as a tough assessment and its recommendations seem to be sensible, they are being made at a time when Iraq is devolving from civil war into chaos at a truly frightening speed and in that context they seem modest.

The report states the situation in Iraqi is "grave and deteriorating" situation, adding that:

"If the situation continues to deteriorate, the consequences could be severe. A slide toward chaos could trigger the collapse of Iraq's government and a humanitarian catastrophe. Neighboring countries could intervene. Sunni-Shia clashes could spread. Al Qaeda could win a propoganda victory and expand its base of operations. The global standing of the United States could be diminished. Americans could become more polarized."

The major recommendations of the report's executive summary are that:

* Most U.S. troops should be moved from combat roles into roles supporting the Iraqi army by early 2008, while not setting a specific timetable for a complete withdrawal.

* The U.S. threaten to reduce economic and military support if the Iraqi government fails to meet specific benchmarks intended to improve security.

* New diplomatic initiatives be opened with Iran and Syria in the service of stabilizing and sustaining the Iraqi government and development of a comprhensive regional peace plan which would include a solution to the Israel-Palestine conflict.

The third thing is that there was little in the report to comfort The Decider, who has resisted the kind of major changes that the report recommends, notably talking with Iran and Syria.

The president said this morning that he takes the recommendations seriously, which of course is different than agreeing with them. It also remains to be seen whether he and the newly-elected Democratic Congress take to heart the ISG's blunt warning that the Iraq mission will fail if they don't work together.

We can hope so.

But the reality is that war has been botched on so many levels that what happens in Iraq is substantially out of the U.S.'s hands.

"Bush has shown extraordinary ignorance, incompetence, negligence, self-delusion, and self-righteousness throughout this disaster of a war. Why would that change now?"

"[The report] outlines a whole series of negative consequences for the US if Iraq fails, then says that if Maliki's government fails to do a bunch of wonderful things the US should reduce its support for the Iraqi government. . . . which would, by the logic of the report, bring about those negative consequences. Why would the Iraqi government take any of those threats seriously? And even more, the report seems to assume that the problem is really one of political will -- Maliki could do all these things if he really wanted to, and we just need to stiffen his backbone -- rather than one of political capacity. The structure of the situation, the logic of civil war and the interests and fears of the major players, seems more relevant to me than Maliki's willpower -- but the report's executive summary says next to nothing about it."

"Everybody seems to be blasting feathers off the lame duck.

"And now we have the recommendations of the bipartisan Iraq Study Group, which is really an attempt by some grown-ups in the Washington establishment to pierce The Decider’s protective bubble and offer some reality-based advice -- even at the risk of telling him some inconvenient truths that, even now, he may not not want to hear. Indeed, the big story in the days and weeks ahead is whether Bush will welcome new thinking, or simply take refuge in his old certitudes."

"So now we have placed the nine Fabulous Baker Boys, plus the Justice not replaced by Harriet Miers, in some sacred circle where they will have ten minutes to tell the truth and not be called America-haters. But alas, there will be no happy ending in Iraq. Like parrots squawking 'Victory!' and 'Finish the Job!' and 'Achieve Our Objectives!' in a burning house, Bush and Cheney are determined to remain the punchline of a sick joke. All that lies ahead is a nightmare of slaughter, for them and for us; all paths lead to generations of instability, not just in Iraq, but across the region."

Jonathan Steele at The Guardian Unlimited:

"What Baker proposes is essentially a continuation of what Bush is already doing -- trying to reduce US deaths by moving troops out of the front line while avoiding any commitment to a full U.S. withdrawal. Benchmarks will be outlined for when to let the Iraqi army take the lead role in Baghdad and other provinces, but this is all fiction. The Iraqis will still be able to call on U.S. artillery, U.S. airstrikes and, as a last resort, U.S. ground troops. It smells exactly like the Vietnamization strategy of the 1970s, which was similarly designed to lessen U.S. opposition to an unpopular war."

"Let's stipulate that the ISG plan is the Best Plan Evah, that if implemented in all of its particulars we would achieve a state of Peak Pony in Iraq within a year. Not that I believe this, of course, but lets stipulate it for sake of discussion.

"The problem is that things like this are doomed to failure because not enough consideration is given to the most likely outcome: Bush and Cheney pick and choose their favorite bits and ignore the stuff they don't like."

"Whatever the final impact of the Iraq Study Group report . . . for the 10 commission members this was an exhilarating experience, a demonstration of genuine bipartisanship that they hope will serve as an example to the broader political world.

" 'It was a very wonderful experience," former Republican senator Al Simpson of Wyoming told me last weekend. 'We very quickly stopped considering ourselves as Republicans and Democrats, but as Americans trying to deal with a most urgent problem'."

Creature at The Reaction:

"There is definitely an Iraq Study Group political show going on here. The ISG was at the White House this morning. They visited Congress this afternoon. They called Maliki directly. And, now, the broadcast networks are pre-empting their soaps for the big ISG press conference. It all seems so well orchestrated that it is hard to imagine the White House hasn't approved the show and that they aren't going to use the study group as political cover. It's a shame, however, that the core suggestion of the study group -- that is to push the Iraqis to stand-up (with a possible stick replacing the carrot) -- is exactly the course we have been on for the last three years. Sorry, but beyond the recommendation for high-level talks with and (and some really dire talk about the situation in general), there is nothing groundbreaking here. "

"The recommendations are precisely what the pro-Israel, pro-Palestinian peace camps recommend and stands in stark contrast to the administration's hands-off policy until now.

"It is critical that progressives support these recommendations and that the new Democratic majority in Congress does not try to score points with the right by criticizing Baker's call for engagement.

"This is what we've been waiting for. Democrats will not be forgiven if they decide to play politics with this. I don't mention Republicans who, as the minority, are no longer particularly relevant especially with Lincoln Chafee (an outspoken champion of Mideast peace) gone."

James Joyner at Outside the Beltway:

"It used to be said that politics ended at the water’s edge; it has been many years since that was a reflection of reality. Both sides will use the Report to seek political cover for what they want to do but I suspect they will continue to bludgeon their opponents over the war."

(Photography by Khalid Mohammed/The Associated Press)
Posted by Shaun Mullen at 8:18 AM
Email ThisBlogThis!Share to TwitterShare to FacebookShare to Pinterest

I miss Arafat in the Springtime,
I miss Saddam in the fall,
Lebanon‘s a mess, it‘s in splinters,
I had no idea at all.

Our only pal, Saudi’s being squeezed cause of Palestine,
And Hugo’s kissing sheiks, what gall,
Rummy says they fight less in the winter,
I had no idea at all.

Condi says this mess is a great opportunity,
Some laugh, but what constitutes reality, is my call,
Every planetary wide entity hates us, look Mom, I really am a ‘Uniter’,
Bombs Away, bombs away, you’all.