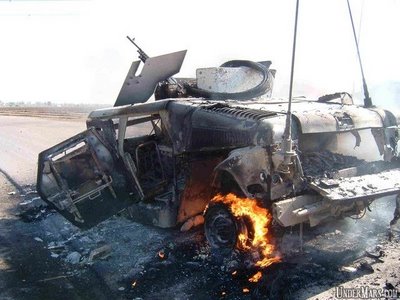 Triple A doesn't offer roadside assistance in Falluja. Blame the Iraqis.
Swiss psychiatrist Elisabeth Kubler-Ross famously identified the five stages that patients experience when told that they are dying as DENIAL (This isn't happening to me), ANGER (Why is this happening to me?), BARGAINING (I promise to be a better person if I live), DEPRESSION (I don't care anymore) and ACCEPTANCE (I'm ready for whatever comes).

It is my modest suggestion that insofar as the war in Iraq is concerned, a stage be added between BARGAINING and DEPRESSION:

Let's call it BLAME (It's not my fault that this is happening).

That is pretty much where an increasing number of people who should know better are going these days. Peter Beinert sums up this blame game thusly at The New Republic:

"Across ideological lines, American politicians and pundits are finally coming to a consensus on Iraq: It's the Iraqis' fault. 'We gave the Iraqis their freedom,' pronounced liberal California Senator Barbara Boxer . . . 'What are they doing with this freedom? They're killing each other.' The next day, conservative columnist Charles Krauthammer heartily concurred, writing: 'We have given the Iraqis a republic, and they do not appear able to keep it.' "

As Beinert notes, the blame game works for just about everyone. Liberals can play it to justify a U.S. withdrawal. Conservatives can play it because it gets The Decider off the hook.

To be sure, and as their history shows, the Iraqis can be a cantankerous people. Various religious sects were beating up on each other long before the U.S. arrived uninvited to depose a dictator whose thuggish rule tended to obscure centuries-old societal fault lines.

Nevertheless, the reasoning of the blame gamers is specious given that the U.S. tore open those fault lines through a willful ignorance that has resulted in the deaths of hundreds of thousands of Iraqis and destroyed countless other lives. Oh yeah, nearly 3,000 Americans have taken the dive, too.

The fatal flaw in the thinking of the Boxers and Krauthammers is that the U.S., because of that willful ignorance, didn't begin to finish a job that they hadn't been asked to do in the first place.

That is the fault of the U.S., not Iraqis.

Great post, thanks. Don't know if you've seen these two short videos from Iraq yet or not, but both show the US Military engaging in some very dubious actions. I have them up on my site at www.minor-ripper.blogspot.com ..You have to wonder what these soldiers were thinking when videotaping this stuff...

Point well taken. I have been fairly unrelenting in covering actions by U.S. troops that were problematic if not criminal, but that was not my intention here.