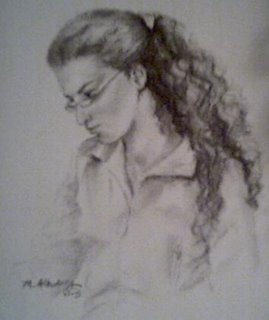 I've been reading Attawie's blog for some time now, and the slow but sure politicization of this young Iraqi artist (and fellow Pisces) has been a sight to behold. Not a pleasant one, mind you.

“At my age, I know there's no such thing like Santa, or fairies, but in a moment I needed to believe anything said to me so I can come to believe that Iraq is coming back, and we Iraqis, inside and outside Iraq, would go back to live our ordinary lives again.

“Life seemed to be much easier before ‘liberation’. I know some people would say this is against the new 's democracy but I believe we've all had enough of ‘the new ’. We've seen children slaughtered, women deflowered, men dragged from their homes to their unknown destination, when the next day they can be found in a plastic case cut into pieces or thrown on the piled up garbage round the corner. Enough massacres and killings, enough hearing about tragic endings of loved ones, we have had enough.

“For so long, since the mandatory forces put their feet in , I knew that it's not going to get any better. I, somehow, kept debating with friends I've known since forever, that the ' troops are not here to free us and give us democracy. Apart from the real reason, and apart from what lies they gave us, which by the way we have had enough of that too, I still hope would be better than ever. . . .

More here.
Posted by Shaun Mullen at 5:45 AM
Email ThisBlogThis!Share to TwitterShare to FacebookShare to Pinterest