Squirrels & the War in Iraq 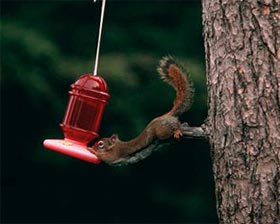 Squirrels may not constitute the sharpest knife in the drawer, but I have come to understand from watching the yard full of them at Kiko's House that they are able to adapt because they learn from their mistakes.

The only predators squirrels face hereabouts are hawks and BMWs, so they pretty much have the run of things. That noted, they figure out pretty fast what works and does not work for them.

When I undetook an annual ritual and put up a big bird feeder and little suet feeder outside the kitchen window about three weeks ago, there was an invasion of squirrels. They were younger squirrels for the most part. I know that because I recognize the veterans. (You're right. I need to get a life.)

Anyhow, for a day or so, these younger squirrels did all sorts of acrobatics to get onto the pegs arrayed around the big feeder. But they quickly figured out that these machinations were much more work than the payoff. Similarly, they left the suet feeder to the woodpeckers, flickers and nuthatches after quickly figuring out that suspending themselves over, under or next to it was much more work than . . . you get the idea.

Then there is the Bush administration, which while far better resourced than the squirrels at Kiko's House, seem to be even duller witted because it simply is unable to learn from its mistakes.

The time to send additional troops to secure Iraq was three years ago, but there is a growing sense that up to 10 brigades constituting as many as 35,000 troops will be pulled from depleted ranks elsewhere and ordered to Iraq in the New Year.

As any squirrel with two acorns to rub together would tell you, they will be much too little much too late.

How dare you insult squirrels by even comparing them to the Bushies!