The Timeless Wisdom of T.E. Lawrence 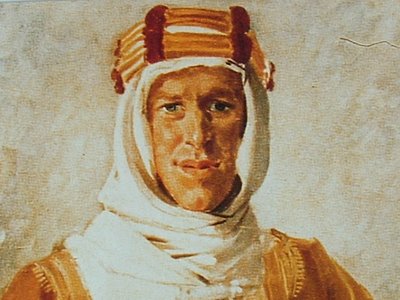 The foundation of my thinking about the interaction between Westerners and Arabs -- which is to say Christians and Muslims -- is "The Seven Pillars of Wisdom," T.E. Lawrence's seminal account of his tireless efforts as a British Army liaison officer to unify various Arab factions and lead them in a guerrilla war gainst the occupying Turkish army in World War I.

Written by the real Lawrence of Arabia, who is rather accurately depicted in David Lean's epic movie, "The Seven Pillars" resonates as powerfully today as it did when it was published in 1926. As a military history, it is indispensible.

"The Marines see their challenge as being the same as the one faced by that young English officer: organize an Arab fighting force to confront a common enemy. Lawrence was working for the British, helping direct an Arab uprising against the Ottoman Empire during World War I. But then as now the Westerner’s promise was the same: a measure of safety and self-governance if the foe can be defeated.

"The Marines have long looked to the experiences of T.E. Lawrence as a guide. As they prepared for the invasion of 2003, Lawrence's writings, particularly his '27 Articles,' published in the Arab Bulletin in 1917, were required reading for Marine officers and senior enlisted.

"Now, as the quick knockdown of Saddam Hussein's regime has turned into the hard slogging of waging a counter-insurgency, Marines say Lawrence's advice and warnings are more timely than ever. On the ground in Iraq’s volatile Anbar Province, Marine officers swear by Lawrence. Col. Larry Nicholson, commanding officer of the 5th Marine Regiment, says in picking officers to interact with Iraqis he looks for 'people skills' -- not the kind of attribute one usually ascribes to a fighting force.

"Nicholson was wounded by a rocket attack on his headquarters at Camp Fallouja, went home to recuperate, and then returned to the fight. When he tells Iraqis that he has shed blood in Iraq, it makes an impression.

" 'I spend a lot of my time eating goat and sipping tea at dinners and meetings where the first half is spent talking about families,' " Nicholson said. 'If you can’t do that, you can’t do the job.' Lawrence also counseled that it is sometimes difficult to decide which tribal leaders are real and which are poseurs. State Department operatives working with the Marines in Anbar bemoan time lost working with 'fake sheiks.'

"If Lawrence had one major warning for Westerners inserting themselves into Arabia, it was this: 'The foreigner and Christian is not a popular person in Arabia. However friendly and informal the treatment of yourself may be, remember that your foundations are very sandy ones.' "

"He also suggested modest aims: 'It is their war and you are to help them, not to win for them.' "

More here.
Posted by Shaun Mullen at 6:54 AM
Email ThisBlogThis!Share to TwitterShare to FacebookShare to Pinterest

Real history is never precise. But Lawrence was not gay, may God bless his soul. Even if the crown was embarrased to swallow that he accepted Islam when in the desert or he has something to do with the creation of the Nation of Pakistan from his acts that got him fired from the RAF. He is an accomplished honorable english moslem of universal belief... Those who betrayed him and dishonored his name should be ashamed of themselves... May the soul of Lawrence rest in peace!