A Footnote on Augie the P & Henry the K 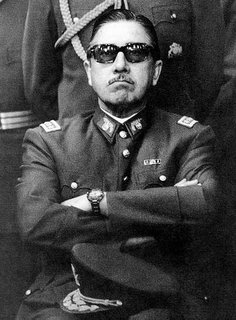 So we don't have former Chilean dictatory Augusto Pinochet to kick around any more. I'm shedding crocodile tears.

Kissinger, as chairman of a secret panel that oversaw covert U.S. operations, was deeply involved in the plot to assassinate General Rene Schneider, who was the commander in chief of the Chilean army and opposed a coup led by right wing groups against democratically elected Socialist President Salvador Allende. After Schneider was murdered, Allende was overthrown by a junta that installed Pinochet, who subsequently detained and killed thousands of his countrymen.

An amazing thing about Kissinger is not that he has blood on his hands, but he has the blood of so many different people on his hands. Pinochet could relate.

Meanwhile, click here for Christopher Hitchens' stinging Pinochet send-off at Slate.
Posted by Shaun Mullen at 5:10 AM
Email ThisBlogThis!Share to TwitterShare to FacebookShare to Pinterest