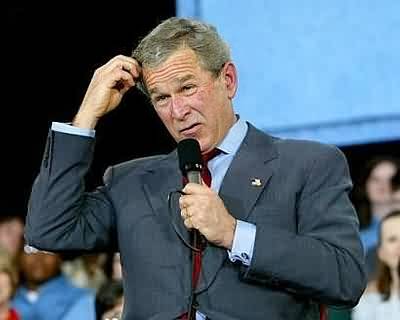 Do you think Santa will leave coal in my stocking?
Under other circumstances, the announcement by the White House that President Bush is postponing making "tough decisions" on the Iraq war until after the New Years because of the complexity of the ongoing policy review would be outrageous.

Why the hay is the White House only now undertaking a policy review?

Go ahead. Just shoot me.

It is probable that what is driving the postponement decision is that there is nothing, in practical terms, that the White House can do to alter events on the ground in Iraq or perceptions at home.

How's this for perceptions:

* An L.A. Times/Bloomberg poll finds that 70 percent of Americans want a new direction in Iraq.

* A WaPo-ABC News poll shows seven in 10 Americans disapprove of the way the president is handling the situation in Iraq -- the highest percentage since the war began. Six in 10 say the war was not worth fighting, while a majority say they agree with the Iraq Study Group's recommendations.

* A Newsweek poll finds that 48 percent of Americans say they want U.S. forces home within a year and 67 percent want them back within two years. Only 23 percent believe they should stay as long as it takes to achieve U.S. goals.

* A Gallup poll finds less than half of Americans are willing to say that they have a great deal or a fair amount of trust in Bush to recommend the right actions for Iraq.

Great post, thanks. Don't know if you've seen this David Letterman clip with Our Fearless Leader in it, but its pretty funny--
www.minor-ripper.blogspot.com

The Elephant in the Room is Oil

Does anybody remember when Bush/Cheney told Shirac, Schroeder and Putin that if they didn't put troops into the fray that they would not get any of the post-war goodies. These were oil men making decisions equivalent to putting together an investment consortium to divvy up access to Iraq's huge oil reserves.
If the US leaves Iraq without holding a power base then Russia, France, Germany and the biggest, winner-by-default competitor, China, will have a leg up on the US oil comrades.
This is so anathematical to US oil interests as to absolutely defy rational description.
Exxon Mobil is financially the equivalent of the fifth or sixth largest country in the world. Then there's Halliburton, Chevron, other oil majors and would-be Texas oil players salivating for Iraq access.
To think that Bush/Cheney can take a fork in the Iraq policy road which is best for the US but leaves the US oils shut out is complete hogwash. Iraq's reserves and the Southern Asia reserves I call Petro-stan represent what, forty percent of the future revenues of the oil and gas business worldwide for the next century?
Bush/Cheney are ethically, morally and financially conflicted and under no circumstances will the US be fully departing Iraq until new non oil related leadership takes office, presumably, in 2008.
No democracy intended; none forthcoming.