'We're Not Winning, We're Not Losing' 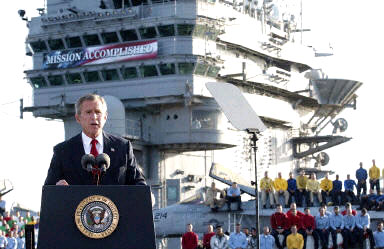 The drugs must be working.

President Bush now says that the U.S. is neither winning or losing the war in Iraq.

But he also says that the U.S. military needs to be made bigger to cope with what ails the world, and he interprets the Democratic mid-term election victory not as a call to bring the war to an end, but to find new ways to win it.

In any event, Michael van der Galien has an excellent round-up of these developments and more here.

Meanwhile, Dick Polman makes a terrific point at American Debate about the Really Big Speech that Bush plans to deliver on the war after the New Year:

"What puzzles me, however, is why anyone at this point would assume that anything Bush says is going to (a) break new strategic ground, or (b) quell the sectarian chaos, or (c) lodge in the American memory. On the contrary, we seem to have forgotten that he has delivered dozens of speeches on Iraq over the past few years, most of them instantly forgotten, with nary a phrase that can be invoked years from now as testaments to either his eloquence or prescience."

"Bush tried to cast his new assessment on Iraq as consistent with his earlier statements, but that's risible on its face. Before the election, he said that we "absolutely" were winning in Iraq. Now he says that he meant it as an absolute commitment to winning there, but that was not how he phrased it then. Insisting that the two statements are somehow equal undermines his credibility in a silly cause. We're obviously not winning in Iraq, and while we're not be losing, it's not the same thing.

"And let's not pretend that the expansion of the military represents some continuity of thought, either. Bush fully backed Donald Rumsfeld's vision of military transformation from a Cold War strength-through-numbers paradigm to the modern rapid-response force that would address the post-Soviet world. It hasn't worked as planned, mostly because the strategies it was designed to support did not get used. Once we decided to stay in Iraq after Saddam's removal -- a decision made for good reasons in the war on terror -- the Cold War style of military was needed for the long-term administration of the country. It takes boots on the ground to pacify insurgencies, perhaps not as many as Eric Shinseki predicted, but more than we have now."

"For the White House to consider sending troops to Iraq without having a clear mission in mind, because they can't think of anything better, is just shameful. George W. Bush has spent his entire life not having to bear the consequences of his own failures. Back in what might charitably be called his business career, those consequences were financial, and they were borne by rich people who were willing to accept them for reasons of their own. Now, Bush is proposing to avoid recognizing that he has failed again by asking young men and women to lay down their lives, without having bothered to come up with a clear idea of what they are supposed to be doing. Children will grow up without a parent; soldiers will have to spend months in Walter Reed learning to live without an arm or a leg; people who have suffered traumatic brain injury will have to figure out how to go on when they can't remember simple things, or concentrate, or control their moods; and for what?"

More here.
Posted by Shaun Mullen at 5:40 AM
Email ThisBlogThis!Share to TwitterShare to FacebookShare to Pinterest

I swear, that should read, ". . . the Democratic mid-term election victory not as a call to bring the war to an end, but to find new ways not to lose it."

I think the fight is a worthy one, but it requires a lot more finesse than some people are willing to admit.

Alas, finesse is not in the Bush administration kit bag. You are correct that the trick will be to not lose the war, but I have a very difficult time seeing how that will be possible if the standard is win-lose and not something in between like a graceful exit.