'The Dollar Melts As Iraq Burns' 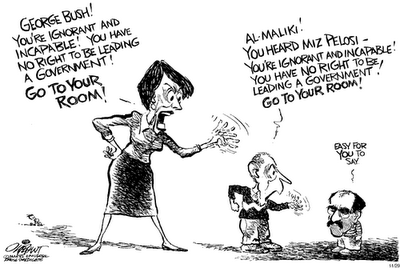 Here's a scary thought: Is the era of the U.S. dollar as the coin of the global realm coming to an end because of the war in Iraq and a loss of confidence in America?

James Galbraith, a left-leaning economist writing in The Guardian, believes so:

"The U.S. economy is going soft faster than the inflation hawks and growth optimists thought. Housing has been in free-fall for months. With the new Congress anxious to display 'fiscal responsibility' . . . there won't be any help next year from them. If business investment falls off, recession could hit in 2007 or 2008. With that fear in mind, gloomy profit expectations are setting in, and that's not good for the dollar.

"The U.S. trade deficit is near all-time records. By itself, this proves nothing: the U.S. supplies reserves to the world system, and it can run any deficit that the world is prepared to finance. But, sooner or later the world may start to get other ideas.

"So here's the big question: is the age of the dollar economy lurching toward an end? Are China, Japan, Saudi Arabia and other big holders of T-bonds about to start a rush, or even a stately promenade, toward the exits? Let's hope not, because the world is unprepared to replace the dollar with anything else. The euro is not suited for the job, and a joint dollar-euro system would need better central bankers than either America or Europe has got. An end to the dollar system would therefore be chaotic, inflationary, and very tough on world trade. The best argument for the dollar has always been: it's not in anyone's interest to bring it down.

"Could it happen, though? Yes, it could. And it could be connected to that other unfolding disaster. As the 'Pax Americana' goes to hell in Iraq -- producing a nervous breakdown among the pro-war elites -- let's remember that security and finance are linked. Typically, the country that provides global economic security enjoys the use of its financial assets in world trade. And when the security situation changes, that privilege can be revoked. The consequences are unpleasant. Ask the British: after the sterling area folded, it took a generation for the U.K. to come all the way back.

That is partly why Economists for Peace and Security, a group I chair, opposed the Iraq war from the beginning. As far back as 2002, we understood -- as the economically illiterate neo-imperialists did not -- that a world system very favourable to America was on the line. And it was not, as they seemed to think, just a matter of military might. We knew that if the war undermined confidence in the power, good faith and common sense of the United States, that could lead toward disastrous changes on the financial front.

"Four years in and with no end in sight, that risk may finally be catching up to the almighty dollar."

(Cartoon by Pat Oliphant/Universal Press Syndicate)
Posted by Shaun Mullen at 5:07 AM
Email ThisBlogThis!Share to TwitterShare to FacebookShare to Pinterest