Joan of Arc and Judith of Murdoch 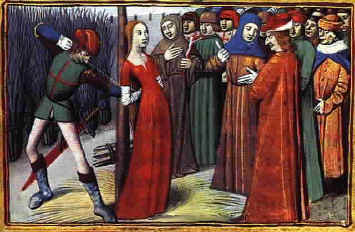 If there were blogs back in Joan of Arc's day, feminists would have accused her enemies of having her torched because she was a woman.

Not without justification, mind you.

And so it comes as no surprise that some feminists are questioning whether Judith Regan was booted from Rupert Murdoch's publishing empire because she is a woman and not because she was so appallingly deaf to the marketplace that she consorted with O.J. Simpson to publish a book on how he "might" have committed the murders.

Zuzu at Feministe, who calls out Regan on non-gender grounds, has a pretty good debate going on among her readers that is a window into the minds of the Feminism Police. You know, the people who will try to have you busted for not hewing to their Taliban-like rules. (Pun and irony intended.)

Meanwhile, Lindsay Beyerstein at Majikthise has a pretty good debate going on about the debate, where I added my hairy chested two cents' worth:

"Being a bald 6-foot-2 male, I dare not comment on whether La Regan's firing was gender related.

"If it was, that's peripheral to the fact that she is a raving a--hole who had lost all sense of proportion when it came to the marketplace.

"She has beaucoup male company in that respect."

* * * * *
What is so interesting to this to a hairy chested observer is that discussions about high-profile women almost inevitably devolve into food fights over whose Feminism Police badge is bigger and before long no one is arguing over the original premise.

A good example was the kerfuffle over Loretta Nall, the Libertarian Party candidate for governor in Alabama, who as an Associated Press scribe put it, "[is] campaigning on her cleavage and hoping that voters will eventually focus on her platform."

Nall provoked a debate on whether a woman can be a feminist and a libertarian if she shows cleavage. (I'm not making this up.) That debate lasted for about a half an hour until the Feminism Police raided the joint and arrested everyone for having a civil discussion.

My own view is that feminism is in the eye of the beholder.

I am qualified to say that because some of my best friends are women and my mother was one. I read Kate Millet, Betty Friedan, Gloria Steinem, Djuna Barnes and Anais Nin when most men wouldn't be caught dead doing so (although I have to say that Barnes is one of the most overrated writers in English literature, while Nin was a rank plagarist).

But face it, feminism is a third-rail issue and no matter what one says, they're going to catch grief from one quarter or another.

So bring it on.
Posted by Shaun Mullen at 1:00 PM
Email ThisBlogThis!Share to TwitterShare to FacebookShare to Pinterest