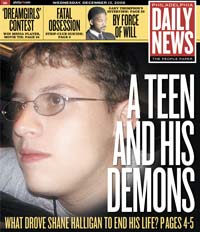 You may have heard that there was another school shooting the other day.

Shane Halligan, a teenager in suburban Philadelphia, came home with a bad report card and was ordered by his parents to buckle down. This camouflage-wearing Eagle Scout, who dreamed of joining the military, returned to his high school the next day with a sawed-off AK-47 semi-automatic rifle and fired wildly into the air before he shot himself to death.

Montgomery County District Attorney Bruce Castor said township police, whose headquarters is only a few blocks from the school, were in the building within 50 seconds of being called and their presence "kept him from firing additional rounds and possibly hurting people."

The AK-47 contained 12 unspent rounds, Castor said, and two more were found in the boy's pocket. An empty 20-round box of ammunition was found at Halligan's home, where his father kept seven firearms, including three military rifles.

* * * * *
The incident, headlined "An All-America Boy, An American Tragedy" in the Philadelphia Daily News, shattered the usual tight-knit community, provoked the usual outpouring of grief and raised the usual questions about why a kid who had everything going for him could do such a thing.

Then there was Shane's father, John Halligan, standing in a sea of dozens of candles held by his son's classmates at a vigil, explaining that he was "floored by this. I truly believed he wouldn't hurt himself." Halligan begged the teenagers to share their emotions with family and friends: "You gotta talk."

If you detect a note of cynicism, you're right.

I wrote and edited dozens of cliche-sodden Shane Halligan stories in my newspaper career. Alternately, as the father of two children now in the early years of adulthood and the uncle of a nephew in his late teens, I have brooded on the forces churning in young minds that sometimes cause them to snap. I also have mused on what I and other parents and care givers can do to help kids deal with and ease the pain that can be an overwhelming aspect of adolescence.

Yet I keep coming back, as I did when pondering Shane Halligan's life, to how superficial the discussions and news accounts and commentaries are. And then I thought a dreadful thought: Should Shane Halligan and the people closest to him not have taken more responsibility?

The answer is an unequivocal "Yes."


Please read the next post by someone who believes that everyone should take more responsibility.

And click here to read about another school-related incident not long ago in which no one seemed to want to take responsibility.
Posted by Shaun Mullen at 5:05 AM
Email ThisBlogThis!Share to TwitterShare to FacebookShare to Pinterest