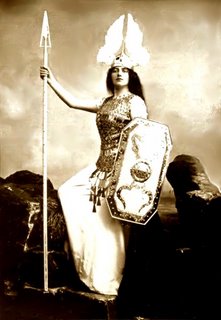 . . . a narcissistic asshole? Tutakai takes a whack at that question here and provides some much-needed perspective on the semi-frenzy over the blogosphere's version of Chicago ward politics, a competition known as the Weblog Awards.

Then there's Ezra Klein's take here, as well as Jill's at Feministe here.

As a target of several attacks from The Diva, who is the win-at-any-costs blogger mentioned by these good folks, I am reminded of something that Kurt Vonnegut wrote:

"Some of us never graduate from high school."

Finally, there's the reliably wicked take of a blogger who shadows The Diva like a bad hair day.

Incidentally, Kiko's House will be entering the Weblog Awards competition next year after the cats become practiced at repeatedly hitting the "refresh" key on the computer in return for extra kibbles.

AT WHAT POINT DOES A BLOGGER BECOME . . .
. . . a shill for the companies who advertise at his site or because of the personal endorsements he makes?

Just asking, because Volvo the carmaker and Pfizer the drug maker had a big day at Instapundit yesterday.

I wouldn't bring this up because I am so in awe of Glenn Reynolds, who in in his spare time tests and endorses kitchen appliances.

But I was unable to locate any mention in Instapundit's vast archives about a recent Volvo recall for a funky cruise control mechanism in some models, or Pfizer taking a multi-billion dollar powder on a new heart medication because it increases heart attacks.

I think Kos said it best when he was being hassled about ads on his site that didn't quite confirm to the liberal view (i.e. exxon and glen beck). Usually, the bloggers have no real control of the content of the ads on their site and instead use a 3rd party service to get the ads for them. But, anyway, Kos said that the second he calls out one ad, then he is essentially endorsing each ad that he doesn't call out.

I am a hard-ass on this one. There are days when Instapundit reads like one big ad. It diminishes the credibility of the blog when Reynolds raves about the virtues of Pfizer but doesn't say crap when it is in the news in such a big way.