Hoofing It & 'The Places In Between' 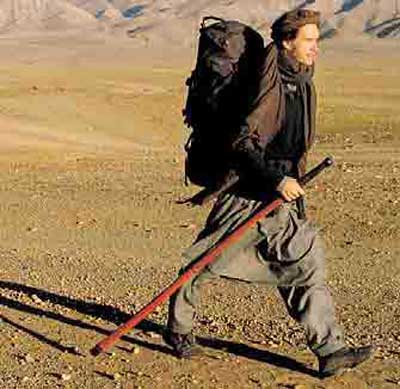 Rory Stewart on the first day of his 600-mile walk
It never ceases to amaze me how there are so many confluences in life. What I mean is that something happens and then something else happens that ties in to the first thing.

A couple of weeks ago I took apart the derailer on my trail bike. I still haven't been able to put it back together and probably will have to take the bike in for a professional look-see.

I try to avoid driving, and in the meantime have been a walking fool, which has been wonderful given the unseasonably mild weather around Kiko's House.

The second confluence arrived in the form of a book -- "The In Between Places" by Rory Stewart -- that I began reading after my futile attempts to reassemble the derailer.

Stewart, a young Scotsman, set out to walk from Iran to Nepal in 2000, but never made the leg in Afghanistan because of the ascendancy of the Taliban and then the U.S.-led invasion after the 9/11 attacks. He finally started the uncompleted leg in January 2002.

"You are the first tourist in Afghanistan," he was warned by an Afghan official before commencing his journey. "It is mid-winter - there are three meters of snow on the high passes, there are wolves, and this is a war. You will die, I can guarantee."

Stewart did not die and lived to write this marvelous book, which is one of the best travelogues that I've ever read and an intimate look at the inscrutible Afghan tribes whom he encountered on his often perilous trek. It has been the perfect companion for my own modest walks hither and yon.
Posted by Shaun Mullen at 9:51 AM
Email ThisBlogThis!Share to TwitterShare to FacebookShare to Pinterest