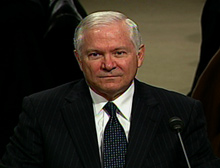 Robert Gates got it wrong right out of the, er . . . gate on Tuesday in the opening session of his nomination hearings to replace Donald Rumsfeld as secretary of defense.

Gates declared that Iraq is "one of the central battlefronts" in the war on terrorism, but failed to note why.

His omission compounded the biggest of The Decider's Big Lies:

Gates did get a couple of big things right: The U.S. is losing the war and the resulting mess may trigger a regional war.

His candor is a refreshing change, but I fear that Robert Gates is too little too late.

More here.
Posted by Shaun Mullen at 5:07 AM
Email ThisBlogThis!Share to TwitterShare to FacebookShare to Pinterest