Chart du Jour on the War 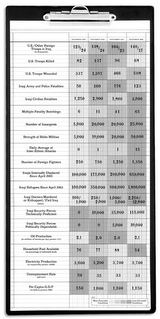 The New York Times has updated its most excellent chart on the state of Iraq.

"As 2006 winds down, two developments inside Iraq stand out: the failure of the previous year’s election to produce any sense of progress, and the commencement of Iraq’s civil war, dating back to the Feb. 22 bombing of the hallowed Shiite mosque in Samarra and escalating ever since.

"It is still possible to find signs of hope in our running statistics on Iraq — the number of Iraqi security forces who are trained and technically proficient, the gradually improving economic output, the number of children being immunized. But those same children cannot feel safe on the way to school in much of today’s Iraq; economic growth is a top-down phenomenon having little effect on the unemployment rate or well-being of Iraqis in places like Anbar Province and the Sadr City slum in Baghdad; and those increasingly proficient security forces remain politically unreliable in many cases, just as inclined to stoke sectarian strife as to contain it."