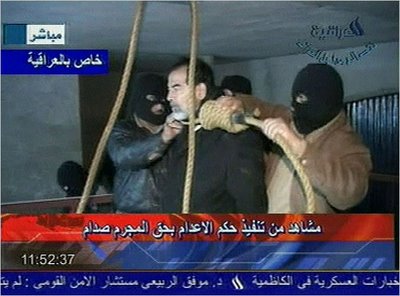 The man known as Saddam Hussein Abd al-Majid al-Tikriti, responsible for three decades of brutality against his people, has been hanged. Osama bin Laden, the man responsible for the 9/11 attacks that were a justification for toppling the Iraqi dictator, remains free.

Saddam, 69, was dressed in black, given a Koran and taken to an Iraqi compound known as Camp Justice in the northern Baghdad suburb of Khadimeya during morning prayers on Saturday.

After a judge read out the sentence, a hangman stepped forward to put a hood over Saddam's head, but he stated that he wanted to die without it. Images like the one above show a once ferocious man who had lost his dignity and all but given up.

President Bush had gone to sleep at his Texas ranch (as in actually sleeping rather than sleeping through his presidency) and was not roused when news of the hanging came.

In a strange footnote, the execution took place on the Muslim holiday of Id al-Adha as celebrated by the country's minority Sunnis. Shiites, who control the government, begin their celebration on Sunday. Saddam had been sentenced to hang for ordering the 1982 killings of 148 Shiites in the town of Dujail.

In keeping with Islamic tradition, he was to be washed, wrapped in white and placed in a coffin before being buried at a secret location later in the day.

Click here for a roundup of news and reaction. The BBC has a video here from Iraqi state television of the proceedings leading up to the hanging but not the hanging itself.

IS SADDAM ON THE FAST TRACK TO MARTYRDOM?
Once upon a time, Saddam's execution would have been cause for an enormous celebration in Iraq and an enormous sigh of relief in the free world. As a reluctant supporter of the U.S. invasion early on, I looked forward to this day. Even as things began to unravel in late 2003, the discovery of a cowering Saddam in a rat hole made me enormously proud of the soldiers on the ground even as I was coming to realize that the men who had sent them to hunt him down were arrogant liars.

I wanted Saddam to face justice in The Hague, but reluctantly agree with the White House-orchestrated decision to have him tried in an Iraqi court. The resulting proceedings were a modest if wobbly triumph despite the repeated efforts of the dominant Shiites to manipulate the proceedings as Saddam himself might have had he still been in power, as well the suspect timing of a death sentence read out two days before a do-or-die mid-term election for George Bush's Republican Party.

Once upon a time, the White House hoped that a guilty verdict, death sentence and execution of a dictator whose crimes beggar belief, would enable Iraq to exorcise its demons. Me, too. But it won't make a jot of difference to a people whose lives are overwhelmed with death and destruction worse than Saddam visited on them.

Sadly -- so sadly -- Saddam's hanging is little more than yet another violent act in a place where lives are now measured by how many family members a person has lost to kidnappings and suicide bombings that are an inevitable result of a mission so fraught with failure that future historians will have no difficulty characterizing it as the worst foreign policy blunder in U.S. history.

As extreme as it may have seemed at one time, it is worth considering whether Iraqis were better off under Saddam Hussein.

That would have been a extraordinary question to ask in 2003. Saddam was, after all, a saber-rattling tyrant. He operated a feared secret police, a system of prisons and psychiatric hospitals full of people who were tortured and held without charge or trial, as well as rape camps. But three and a half years later, the question has taken on a shocking legitimacy.

And in turn leads to another question:

George Bush and his neocon brain trust have taken a broken country and broken it all over again. They have succeeded in doing the impossible by making many Iraqis nostalgic for the bad old days.

Will Saddam Hussein's legacy be martyrdom instead of infamy?

Oh, by the way, Osama bin Laden is still alive.
Posted by Shaun Mullen at 11:35 AM
Email ThisBlogThis!Share to TwitterShare to FacebookShare to Pinterest

At Hill and Viteri Property, we take care of you. We offer an absolute property administration arrangement with the fundamental point of making your land experience simple and tranquil.  houses for sale in greystanes