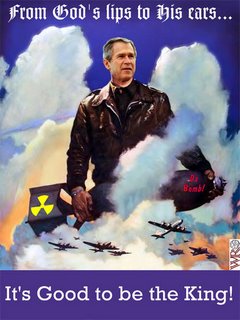 Even at this late date, I still pray that George Bush finally sees the light on the Iraq war.

That too is the view of the Nitpicker, who in a turn at Unclaimed Territory, noted that after hearing positive things about the president's Washington Post interview, he thought that:

"Bush had at least met the reality-based community halfway. This should be the Come to Jesus Moment those few Americans still hanging on to the shreds of this debacle."

This is what Peter Baker had reported in the WaPo about the interview:

"As he searches for a new strategy for Iraq, Bush has now adopted the formula advanced by his top military adviser to describe the situation. 'We're not winning, we're not losing,' Bush said in an interview . . . The assessment was a striking reversal for a president who, days before the November elections, declared, 'Absolutely, we're winning.' "

While this is what the president actually said:

WaPo: "Are we winning in Iraq, in your estimation?"

Bush: "You know, I think an interesting construct that General [Peter] Pace uses is, 'We're not winning, we're not losing.' There's been some very positive developments. And you take a step back and look at progress in Iraq, you say, well, it's amazing -- constitutional democracy in the heart of the Middle East, which is a remarkable development in itself."

WaPo: "Can we come back to General Pace's formulation about winning, not losing? You said October 24th, 'Absolutely, we're winning.' And I wanted to -- "

Shame on the WaPo for such sloppy reporting. And shame on the president for being as delusional as ever.
Posted by Shaun Mullen at 5:37 AM
Email ThisBlogThis!Share to TwitterShare to FacebookShare to Pinterest

It is amazing how Bush will not relent despite popular opinion. Ugh. Even more depressing is Sen leader Reid saying that a troop surge is acceptable.