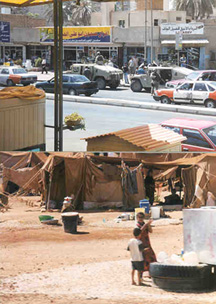 In another signal accomplishment for The Decider, the U.N. now estimates that Iraqis now consistute the fast-growing refugee crisis in the world, according to Refugees International.

According to the report, the U.N. estimates that:

* 2.3 million Iraqis have fled violence in their country; 1.8 million have fled to surrounding countries.

* Some 500,000 have vacated their homes for safer areas within Iraq.

* An estimated 40,000 people are leaving Iraq every month for Syria alone.

* Other countries through out the Middle East, including Jordan, Egypt, Lebanon, Yemen, Iran and Turkey are also seeing increased flows.

* Most Iraqis are determined to be resettled to Europe or North America, and few consider return to Iraq an option.

PROVIDING COVER
The conventional wisdom had it that the Iraq Study Group report would provide the necessary political cover for The Decider to make some badly needed course corrections.

Now the CW is that conservative harrumphing over the report will provide the necessary cover for The Decider to reject much of the report.

UPDATE ON THE AL-MALIKI DEATH WATCH
Way back in September, when the world seemed a simpler place and the war a simpler war, I predicted the Iraqi Prime Minister Nuri Al-Maliki was not long for this world.

A whole lot more folks are agreeing with that assessment.

TALK TO THE INSURGENTS? NAH
Some much for the Bush administration assertion that it would never talk to, let alone negotiate with, terrorists.

The Times of London says that earlier this year senior American officials, including several generals, engaged in two months of secret talks with Iraqi insurgent commanders -- something that the Iraq Study Group urged in its report.

The talks eventually collapsed because of disagreements among the insurgents and an increase in insurgent attacks.

I recently read "The Battle for Peace" by General Tony Zini. He argues persuasively for early intervention in a refugee crisis. These added refugees will put preasure on the host countries that can very easily lead to greater instability in the region. Zini asserts it is in America's best interest to help maintain stability.

Absolutely. I also believe it is why Iran and Syria at some point might have to intervene in less negative ways.