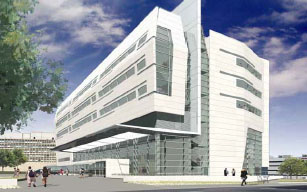 As noted here last week, ’s health-care system is in crisis. But if you want to see where U.S. hospitals are likely to find themselves sooner rather than later, consider the number of hospitals in New Jersey that are on life support.

* The is so low on cash that it has been on the brink of shutting down twice. A bankruptcy judge has approved its sale to another hospital in .

* The 's Healthcare System, which runs several hospitals, has a $450 million budget, but is barely breaking even and can’t afford to replace important but aging equipment.

The St. Barnabas Health Care System, the state's largest hospital group, is on its knees because it has been forced to cough up $265 million to settle a federal lawsuit over billing fraud.

* Repeated scandals have rocked the state’s premier hospital -- the University of Medicine and Dentistry of New Jersey and an affiliate, University Hospital in Newark -- which I recently blogged about in a post entitled New Jersey's Biggest Crime Family.

Some of these hospitals’ wounds are self inflicted, to be sure. But with occupancy rates plummeting and other trends conspiring, odds are that at least 10 hospitals will go bankrupt in coming months and the underlying reasons are beginning to eat away at hospitals in other states like an infection that is resistant to antibiotics.

As a story in the Bergen Record of Hackensack, New Jersey, notes, the reasons so many hospitals are in so much trouble include:

Payments from government programs such as Medicare and Medicaid are falling increasingly short of the costs of running hospital.

* Charity care costs are rising precipitously, some 25 percent in the last year alone for some hospitals.

* The consolidation of health insurance companies has given them more negotiating clout than hospitals.

The regulation of the rates that hospitals could charge insurers ended in 1992 and hospital administrators have been ill prepared to negotiate with managed-care companies. As a result, hospitals have few capital reserves and can ill afford to invest in new equipment.

Doctors are doing their part by diverting healtheir and better off (ie., insured) patients to their own out-patient surgical centers, leaving sicker and uninsured patients for hospitals. physicians also order more tests and procedures and keep patients in the hospital longer than their counterparts in other states.


The ramifications for New Jersey may be disproportionately large. Hospitals represent the state's fifth-largest industry with 150,000 employees.


But in any event, what we have here is a national Code Blue:

Trends in health insurance and health care are working against hospitals that don't have an affluent clientele and deep pockets, very often hospitals that provide good care to small but loyal communities.

Competition between hospitals for the same patients is cutthroat.

Lax federal and state oversight is encouraging ethically challenge administrators to cook their books when it comes to federal reimbursements.

Doctors, perhaps the most influential group after insurers, also are contributing to the problem.

In the end, of course, it is the quality patient care that suffers the most.
Posted by Shaun Mullen at 5:36 AM
Email ThisBlogThis!Share to TwitterShare to FacebookShare to Pinterest