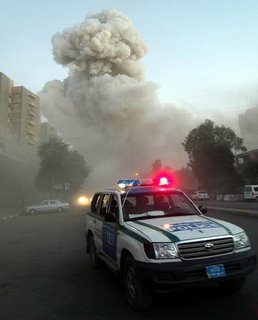 "War spews words. They make up its fog. Washington was awash in them last week as the damage control exercise called the Iraq Study Group culminated with a proposal to extract all American combat brigades by early 2008, leaving a few tens of thousands of troops to train the Iraqi Army or protect the trainers. As befits a bipartisan report on what looks like a lose-lose situation, it was a fudge.

"But beyond the words — from President Bush’s chagrin at 'the pace of success' to the report’s 'grave and deteriorating' situation — lie people, the millions of Iraqis who have to get their kids up in the morning, those dimly discernible objects of the myriad political contortions. One of them, a 32-year-old Iraqi engineer encountered earlier this year in Baghdad, had this to say in a desperate e-mail message:

'I am facing the most difficult times of my life here in Baghdad. Since I am a Sunni, I became a target to be killed. You know that our army and police are Shia, so every checkpoint represents a serious threat to Sunnis. During the last three weeks, two of my friends were killed at check points belonging to the police. They first asked to show IDs and when they saw the Sunni family name, they killed them.'

"There, in plain enough English, you have it. The Iraqi Army and police whose proposed reinforcement lies at the center of the Iraq Study Group’s plan for American extraction are often less neutral institutions supporting the nation than a flimsy camouflage for Shia to settle accounts with Sunnis, while the Kurds bide their time and hope the child of chaos will be an independent Kurdistan."