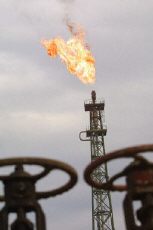 People desperate to point out that good things are happening in Iraq are noting that the parliament is near an agreement on how to distribute the country's oil wealth. The distribution of oil revenues, the mainstay of Iraq's economy, is at the heart of some of its most contentious political issues.

But Mohammmed at Iraq the Model, a reliably pro-U.S. blog, calls attention to a fundamental disconnect:

"[I]f oil export levels retain the current level and under stable prices, the coming year will witness a record income that was never reached in the history of modern Iraq and revenues will jump up to 40 billion dollars; a huge figure given the humble plans of the government and a figure that will put the government in a position where it must come up with new and ambitious plans to match the new revenue figures.

"In fact and from what can be read in papers and heard from official statements it seems most government departments failed to spend the funds allocated by the government for those departments to execute their projects.

"That's not because of security challenges only since there are several regions in the country that are relatively stable and where work can be done but more because of bureaucracy and corruption that make it extremely difficult to implement plans and make sure the money is spent in the right direction."

More here and here.
Posted by Shaun Mullen at 5:13 AM
Email ThisBlogThis!Share to TwitterShare to FacebookShare to Pinterest