Iraq & The Day After the Study Group Report 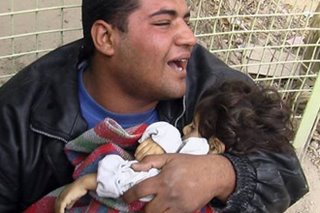 An Iraqi father cradles his fatally wounded daughter
Being a little slow on the upstart and morbidly optimistic in a cynical sort of way, I kept thinking yesterday -- and it occurred to me again this morning as the chickadees yapped at me while I went up a stepladder to fill the bird feeder -- that the Iraq Study Group had spoken and change was in the air.

Unfortunately, I was wrong. Change is not in the air.

Since I've been coblogging at The Moderate Voice, I have a new appreciation for bipartisanship-ness and the ISG has been a model of that all but passé concept. Even though the group's recommendations had been leaked for weeks and pretty much comported with what I thought they would be, I was hopeful.

Regretably, I was wrong. Change is not in the air.

The Decider is still president. The war in Iraq is still his war. The likelihood of him heeding theISG's clarion call is remote. And the little girl in the wrenching photo above this post is still dead.

Tragically, I was wrong. Change is not in the air.