Iraq: Should the U.S. Withdraw to Kurdistan? 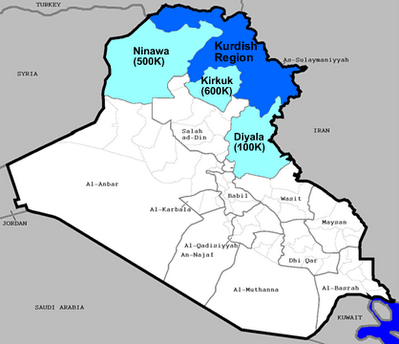 Given the Mess in Mesopotamia, there is increasing talk of withdrawing U.S. troops to Kurdistan in the north where they would be based and used as rapid-reaction forces that swoop down into Iraq proper and then withdraw at the end of each mission.

The Iraq Study Group apparently considered by did not recommend that idea, which has appeal but is frought with peril.

What exactly is Kurdistan, who lives there, how big a player might Turkey be in all this, and what does the future hold? Bruce R answers those questions and then some in a probing post at Flit.

"The Kurds are currently pro-U.S. largely because it's in their obvious best interest. That could change, of course. Possible circumstances where Kurdistan could grow rather hot for U.S. forces there rather fast would include: taking a stance against any border corrections in Kurds' favour for Ninawa or Diyala; declining to support that 2007 referendum in Kirkuk if the country breaks up before then; or allowing Turkish forces, which are currently fighting Kurdish rebels of their own, into the Kurdish region in hot pursuit.

"On the other hand, taking the opposing position in any of these questions could put the U.S. up against Iraqi government or Turkish interests, as well. In Iraq's case, to use the U.S. Civil War analogy, these are their "border states:" unlikely to be shrunk or surrendered without the most vehement of efforts.

"This is a significant issue because ground-based sustainment of U.S. forces in the landlocked Kurdish region would depend on the goodwill of one or both of these governments. Air-based sustainment would limit the sustainable force in that region to a size insufficient for much more than special forces activities and some basing of air assets. A military solution that keeps American main forces with a ground force projection capability in north Iraq therefore demands the willing compliance of both the Kurds and either the Iraqis or Turks: a difficult circle to square."


(Hat tip to Andrew Sullivan at The Daily Dish)
Posted by Shaun Mullen at 5:28 AM
Email ThisBlogThis!Share to TwitterShare to FacebookShare to Pinterest