A Commentary on The Foghorns of War 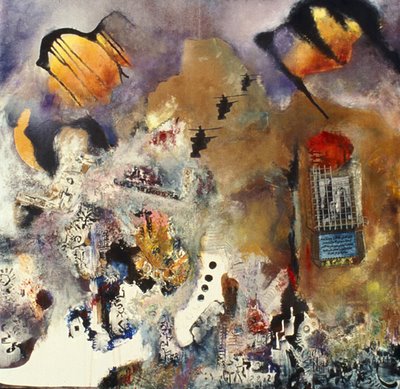 I suppose that we each have our own ways of trying to grasp momentous events like the war in Iraq. But as absorbed by and thoroughly read as I am about the war, I still am brought up short when I am reminded of how utterly unnecessary it was.

That happened again the other evening. The Dear Friend & Conscience was working on a PowerPoint presentation in connection with a class-action lawsuit being brought on behalf of the firefighters, police officers and other responders to the 9/11 attacks on the World Trade Center who are suffering from severe respiratory problems.

I had helped the DF&C download some photographs of men and women working amidst the debris who look like they are wearing whiteface. This is because there was so much crap floating around in the enormous dust clouds from the collapse of the twin towers, an airborne cocktail that included glass particles, asbestos, lead, hydrochloric acid, PCBs and dioxins.

I retired to the bedroom to have a brief rest before starting dinner. As I laid in the early evening darkness listening to the wind, I thought about the nearly 3,000 people who died in the 9/11 attacks on and and aboard United Flight 93 when it crashed into a field in western Pennsylvania.

Then I thought about the people that the DF&C is getting to know –- the NYFD paramedic stationed around the corner from the World Trade Center and the heavy equipment operator who drove all the way from California with his backhoe lashed to a semi-trailer –- who developed life-threatening respiratory problems as a result of their heroism and patriotism. These problems were long denied by health officials, which necessitated the lawsuit.

Then I thought about the foghorns.

Our friend Phil worked in the financial district near the . Along with many thousands of other people, he stumbled out onto the street as the twin towers collapsed. The air was so thick with smoke and debris that he couldn’t find his way. Then the captains aboard the ferryboats at the docks a few blocks to the west started blowing their foghorns. Mooooooap. Mooooooap. Mooooooap. Phil stumbled toward the sounds. Reaching the river, he turned north and walked 100 or so blocks to the safety of his uptown apartment.

Then I thought about the war in : The thousands of dead and wounded soldiers. The millions of dead, wounded and displaced Iraqis. Childhoods shattered. Families sundered. Careers vanquished. Dreams destroyed. The most volatile region in the world threatened with a wider war.

These numbers also are a fog of a sort. They obscure an enormous truth: That it was the arrogance of small men with big minds who had the ear of an even smaller man drunk with power that led to a war that should have never happened.

(Image: "The Fog of War" By Norton Wright)

Posted by Shaun Mullen at 4:59 AM
Email ThisBlogThis!Share to TwitterShare to FacebookShare to Pinterest