Hillary Rodham Clinton Gets Her Comeuppance 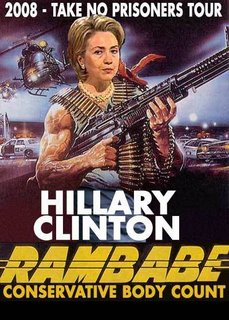 Arianna Huffington at The Huffington Post has crafted a wicked smackdown of Hillary Rodham Clinton, the queen of the waffle (and I'm not talking the kind you smother in syrup).

"With Democrats on the rise, her perfect plan seemed to be working out perfectly.

"And then suddenly, unexpectedly, came a rumbling in the distance. A rumbling caused by a boy named Barack. Indications are that before the year is out, Barack will officially be in.

"All at once, a surge of enthusiasm and support for the boy named Barack is threatening to ruin all of the girl named Hillary's perfect plans -- like sand castles being washed away by a rising tide.

"So, my little ones, what is the lesson to be learned from this tale?

"That you might as well speak your mind and do what is in your heart because you never know what waits around the corner -- what unforeseen forces are headed your way.

"As the poet tells us, the best-laid plans of mice and men -- and perfect little girls -- often go awry. And, man oh man, are they ever going awry for Hillary.

"Well, you know what they say: Obama Happens."