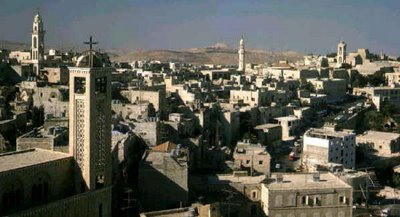 This Christmas will be the gloomiest in memory for the biblical town of Bethlehem. More than 150,000 tourists used to visit the birthplace of Jesus, but this year many fewer are expected and will bypass Bethlehem's historic inns for hurried day trips amidst fears of bomb attacks.

"Those who are prepared to make the journey will be confronted by a huge concrete wall, measuring 25 feet high and topped by electrified razor wire, which cuts West Bank Bethlehem off from neighbouring Israeli-controlled Jerusalem. At the wall, pilgrims will have to pass through a checkpoint, manned by Israeli soldiers armed with automatic weapons. . . . Israel has stated that the wall between Israel and the Palestinian West Bank is necessary to prevent suicide bombers from entering Israel and attacking its citizens. The effect of the barrier, increased Israeli security measures and the ongoing conflict in the region have had a devastating effect on tourism to the Holy Land, once the backbone of its economy. Only a dozen or so bookings have been made at Bethlehem's 250-room five-star Jacir Palace hotel, and none of them have been confirmed."

More here.
Posted by Shaun Mullen at 5:44 AM
Email ThisBlogThis!Share to TwitterShare to FacebookShare to Pinterest