Leaks 'R" Us: Bowed But Not Beaten 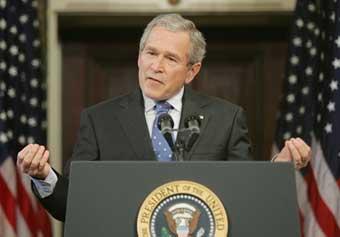 Another indication that George Bush is one worn down president:

On February 10, 2004, responding to the news that the Justice Department had launched an investigation into who revealed the identity of Valerie Plame, the president told reporters:

"If there's a leak out of my administration, I want to know who it is. If the person has violated law, that person will be taken care of. . . . I want to know the truth."

On December 20, 2006, responding to a question regarding the leak of a classified memo that questioned the ability of Iraqi Prime Minister Al-Maliki to help U.S. interests, the president told reporters: