Iraq II: A Country Less Than the Sum of Its Parts 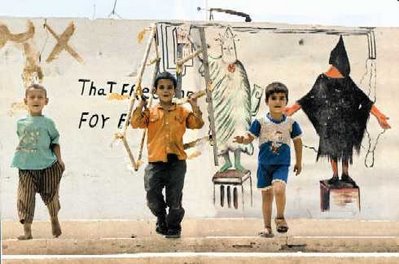 Elrod has put together a terrific overview of the Iraq Study Group report over at The Moderate Voice that touches on a much overlooked conundrum: Iraq is less than the sum of its parts.

"Once upon a time Iraqis came together to fight the Iranians. But a small group of Iraqis joined the Iranians, and that group (SCIRI) now leads Iraq. Whatever 'national identity' there was forged in war against Iran, the current Iraqi government does not reflect it. But that's only the tip of the iceberg. Iraq has devolved into sectarian warfare the way Lebanon did in the 1970s and 1980s. There is literally nothing holding the country together anymore. The elected government is unable to rule outside the Green Zone. The Iraqi people have no trust in the Iraqi army - and the U.S. army holds the Iraqi army in equal contempt. The security forces double as sectarian death squads. And the various ministries serve as fiefdoms for private militias so that Sunnis cannot even visit their relatives in hospitals for fear of capture by Sadrist militiamen operating inside the Health Ministry.

"Ladies and Gentlemen: There is no Iraq. There is not a neat tripartite division of Kurds, Sunnis and Shiites either. There is total anarchy, and the only allegiance to which the various security forces pledge are those of sect, tribe and ethnicity. This irregular tapestry prevents any central government from 'cracking down' on the various elements."

The lead paragraph of a news analysis by Sheryl Gay Stolberg in the New York Times says it all:

"In 142 stark pages, the Iraq Study Group report makes an impassioned plea for bipartisan consensus on the most divisive foreign policy issue of this generation. Without President Bush, that cannot happen."

While the lead paragraph of a military analysis by the Times' Michael Gordon's is no less blunt:

"The military recommendations issued yesterday by the Iraq Study Group are based more on hope than history and run counter to assessments made by some of its own military advisers.

"Ever since the invasion of Iraq in 2003, the United States has struggled in vain to tamp down the violence in Iraq and to build up the capacity of Iraq’s security forces. Now the study group is positing that the United States can accomplish in little more than one year what it has failed to carry out in three."

"The Bush administration routinely has underreported the level of violence in Iraq in order to disguise its policy failings . . .


"The bipartisan group called on the Pentagon and the director of the U.S. intelligence community to immediately institute a new reporting system that provides 'a more accurate picture of events on the ground.'

"The finding bolsters allegations by Democratic lawmakers and other critics that the Bush administration has withheld or misconstrued intelligence that conflicted with its Iraq policy while promoting data and claims that supported its positions.

"Those allegations date back to President Bush's contention before the March 2003 U.S.-led invasion that Saddam Hussein was hiding illegal nuclear, chemical and biological weapons programs. His claim proved to be unfounded."

Posted by Shaun Mullen at 6:08 AM
Email ThisBlogThis!Share to TwitterShare to FacebookShare to Pinterest