Abu-Jamal: Still Guilty After All These Years 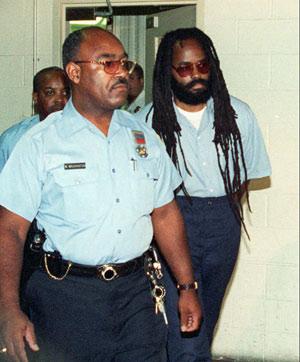 I don't remember why I had stayed after my 1 a.m. quitting time as night city editor of the Philadelphia Daily News early on the morning of December 9 some 25 years ago this week, but I do remember that I was talking to Tom Schmidt, the overnight editor, when a message crackled over one of the police radio scanners:

Police Office Daniel Faulkner had stopped a car driven by one William Cook. According to the police and prosecution version of what happened next, Cook assaulted Faulkner, who then tried to subdue Cook. At this point, Mumia Abu-Jamal, Cook's brother, jumped from a nearby taxi that he was driving and shot Faulkner in the back. Faulkner returned fire, seriously wounding Abu-Jamal, who shot the officer four more times at close range as he staggered toward him. Abu-Jamal was quickly arrested and transported to a nearby hospital. During the brief trip, he stated that "I shot the motherfucker, and I hope he dies."

I knew Abu-Jamal, born Wesley Cook. He was as a part-timer for several African-American publications who drove a cab to make ends meet. He wanted so badly wanted to work for the Daily News that whenever he had an opportunity he would stop by the newsroom to schmooze. I thought that Abu-Jamal was a nice enough guy, but was a little too green and a little too willing to inject his politics into what he wrote.

There never was any doubt in my mind that Abu-Jamal, seeing his brother scuffle with Faulkner, had shot the office in the heat of the moment. A jury agreed and he was convicted and sentenced to death in 1982. In 2001, the death sentence but not the conviction was overturned. Both sides are appealing.

In the 25 years since the murder, Abu-Jamal has become a jailhouse pundit and international cause célèbre, a darling of Amensty International and lightning rod for opponents and proponents of the death penalty. He enjoys little support in Philadelphia, but the further one gets from there the more people consider him to be the victim of political prosecution.

As surely as the seasons come and go, Abu-Jamal cycles in and out of the headlines. With the Philadelphia mayor's race heating up, he's back in the news because a state legislator who wants to be the next mayor has proposed that he be given a new trial.

Beyond political postering and basking in the glow of international awards, among them being made an honorary citizen of Paris (sacré-freaking-bleu!), Abu-Jamal has been unable to make a strong case for his own innocence. He has refused to testify on his own behalf and failed to produce his brother to testify.

Nevertheless, Abu-Jamal's never ending case highlights a lot that is wrong and damned little that is right with the criminal justice system.

* The judge at the original trial showed a clear bias for the prosecution.

* Abu-Jamal fired first his first lawyer and represented himself. He put on a political defense ("they went after me because I'm a black man") and did such a lousy job that the judge ordered the lawyer back into the courtroom.

* While the physical evidence against Abu-Jamal is powerful, the ballistics tests were botched.

Was Mumia Abu-Jamal a victim of a political prosecution?

Was he guilty but framed?

Is he deserving of all the attention?

Given your other opinions, I am very impressed by this one. You are indeed right that the criminal justice system has many problems and makes mistakes. It is a flawed system because it is staffed by humans. But some system of justice is necessary. We need to stand by it because the veneer of civilization is thin and hard to maintain. Attacks by otherwise rational people against the putative motives of our police and prosecuters bespeak extreme levels of naivete and unmitigated idealism.

A flawed criminal-justice system is better than none at all, but not much. There are deep and serious problems with the U.S.'s and they are not being addresses.