More on Iraq: The Sunnis Shiite in Their Own Hat 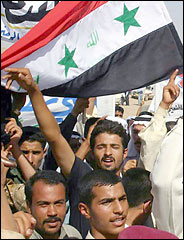 One of the unintended consequences of the war in Iraq has been the slide of the Sunni minority from dominance to a fight for its very survival.

The self destruction of the Sunnis is analyzed by Wretchard at The Belmont Club. Some excerpts:

"The first and fatal miscalculation by the Sunnis was to think they could drive the U.S. Armed Forces from Iraq, a gamble which they lost. Encouraged by the absence of a crushing campaign in northern Iraq . . . and alienated by the American decision to 'de-Baathize' Iraq, many former military Sunnis chose to continue resistance using guerrilla tactics. By March, 2004 they were ready. The insurgent uprising of early 2004 that culminated in the abortive First Battle of Fallujah, which still saw the Shiites in as militarily inferiors. Moqtada al-Sadr's men were as yet limited to their bailiwicks and relatively weak. But doomed attempts to stand and fight against U.S. forces eventually imposed crippling human and material losses on the Sunnis. . . .

"The Sunni insurgency compounded its military failures by ruthlessly suppressing any attempts by their ethnic leaders to participate in political process sponsored by the Coalition and by murdering any Sunni who came forward to join the new Army and Police. The result was that Sunnis were underrepresented in both the Constitutional convention and in the elections of 2005. It was a double-whammy. Not only were Sunni military resources depleted, but they self-selected themselves out of the American sponsored Iraqi government. In my personal view, the Sunnis were encouraged along this path to disaster, not only by the mixed signals sent by the U.S., which alternately seemed to conciliate and confront them, but also by the coverage of the MSM which trumpeted the view that the Insurgency was growing more potent.

"What news stories missed until very recently was that the insurgent determination to fight increasingly sprang from despair rather than confidence in a Sunni restoration. The recent press release announcing the establishment of a rump Sunni "Caliphate" consisting largely of desert and absurd claims to oilfields beyond their grasp should have signalled how low their ambitions had fallen. But one person who understood how badly things stood for the Sunnis was Abu Musab Zarqawi. In the last months of his life, Zarqawi viewed with mounting alarm the American program to rebuild the Iraqi Army, largely from Kurds and Shiites -- since the Sunni insurgents did their level best to blow up any lines of Sunnis who applied for Iraqi Army or Police jobs -- and understood that unless he could drive America out of Iraq by other means all was lost. His solution was to unleash chaos upon everything. . . ."


ONWARD & DOWNWARD
The L.A. Times reports that the 9th Mechanized Division, the most highly regarded Iraqi army unit, isn't even capable of taking the lead in a joint operation with U.S. troops.

"The offensive was initially billed by U.S. officials in Baghdad as an Iraqi-led success and a case study in support of the Pentagon's increasing reliance on using American troops as military advisors as a way to shift security responsibilities to Iraqi soldiers.

"But interviews at their joint Rustamiya base with U.S. advisors and Iraqi soldiers involved in Friday's battle revealed a different story. The operation was hastily prepared and badly executed, they said, and plans to let the Iraqis take the lead in the battle were quickly scrapped.

" 'It started started out that way," [Staff Sgt. Michael] Baxter said. "But five minutes into it, we had to take over.' "

More here.
Posted by Shaun Mullen at 4:57 AM
Email ThisBlogThis!Share to TwitterShare to FacebookShare to Pinterest

Maybe we should ask the US Army what it thinks about the military effectiveness of the Sunni resistance? Last time i looked the Sunnis were doing a pretty good job at driving the Americans out of the country. As to their relative strength vis-a-vis the other factions: Iraq has a very young and still growing population, therefore there a are lots of young men reaching military age each year on each side. That in combination with the fact that all fractions have ample access to money and weapons means that this particular civil war has the potential to go on without a clear decision for many years. Without open intervention by the Iranians in this conflict i would not count out the Sunnis any time soon.

All excellent points, but I think Wretchard's overriding point in this context is very important: the Sunnis may be doing a pretty good job of driving the Americans out, but they cannot succeed in a civil war with the Shiites. And although you didn't ask, I can't imagine the Saudis coming to the aid of their Iraqi Sunni brethern although they're quietly making noises to that effect. The bottom line, I suppose, is that this civil war will indeed go on for years.

It is certainly an uphill fight for the Sunnis, but this was the case from day one of this war. Given their situation the Sunnis/Baathists had never a real alternative to fighting: The SCIRI and Kurdish factions were busy preparing themselves for a de facto partition (with all the assorted oil wealth) while the official US policy was 'Debaathification' (ie everyone but the Sunnis). Peaceful participation in the political process would have only meant getting royally screwed over in a less bloody way.
And they are now fighting for almost 4 years against what is effectively an American/Shiite/Kurdish alliance, with the Americans providing so far the vast bulk of experienced fighters and firepower. With the prospect of an upcoming (and partially already ongoing) withdrawal of US troops into isolated superbases/over the horizon/wherever their tactical situation will most likely actually improve. In terms of military experience and organization they seem considerably superior to their Shiite counterparts: The 'Iraqi' (Shiite) police seems like an agglomeration of death squads, not a military fighting force, while the army consists mainly of light infantry without any heavy weaponry. They are good at terrorizing civilians but have yet to prove their mettle against an organized fighting force. This fighting force is right now bottled up in the 'Sunni triangle' by US forces.
But any analysis depends ultimately on the actions of the Iraqi warlord with the most firepower of them all: George W. Bush. Will he order withdrawal? 'Stay the course' for two more years? Or maybe throw his lot fully with the Shiite and crown his reign with a veritable genocide? As Congress has completely abdicated any responsibility for the conduct of war, and the only time a US general will ever speak up is after his retirement it's his and only his decision to make.

You are correct: Pardon the term, but the buck stops with Bush.

Consider the quotes below from
Juan Cole (Informed Comment Fri 11.24.06) Score 10 for Jallabo!

Another friend, a Sunni sheikh of the Shammar tribe noted to me that thousands of former officers are prepared to assault the G[reen] Zone]. It is no longer a matter of can they do it, they are only mulling over the timing. The breach of the Green Zone security the other day was a test of their ability to get in, and not a real attempt at a coup, though it is reported as such.
Every Iraqi I talk to says unambiguously that the resistance attached to the former regime would take out the Shiite militias with barely a fight, but that the resistance will not commit wholesale revenge against the Shiite population. They just want to get rid of the "carpet baggers" from Iran.