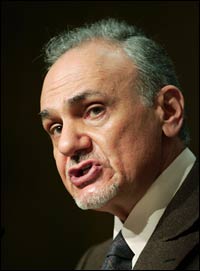 Is anyone buying the explanation that Prince Turki al-Faisal, Saudi Arabia's ambassador to the U.S., has abruptly resigned after only 15 months on the job "to spend more time with his family"?


Secondly, the departure comes only days after Turki dismissed a consultant for suggesting in a Washington Post op-ed piece that the kingdom would back Iraq's Sunni minority with money and weapons if the civil war grows wider. The ruling family and most Saudis are Sunnis.

Saudi Arabia denied the assertion, which nevertheless is widely viewed as accurate.

Thirdly, the resignation comes amid talk that the White House is considering a so-called "80 Percent Solution" for Iraq in which it would take sides with the Shiites against the Sunnis in the civil war.

Kind of adds up, don't you think?

More here., as well as a late-breaking story here on Vice President Cheney getting read the riot act by King Abdullah when he visited Saudi Arabia.
Posted by Shaun Mullen at 7:16 AM
Email ThisBlogThis!Share to TwitterShare to FacebookShare to Pinterest