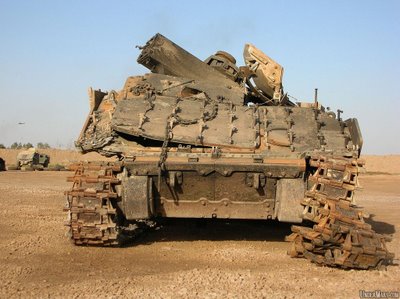 This damaged tank, armor plate and turret rearranged and one set of tracks off, is an apt metaphor for where the U.S. is in Iraq as we slouch toward the New Year.

Three years and nine months into the war, attacks against U.S. troops are at a record high, which is all the more extraordinary because many units are staying in barracks except for occasional forays out among the locals.

Three years and nine months into the war, the Pentagon acknowledges that Anti-American cleric Moqtada Al-Sadr's sectarian militia is more dangerous than Al Qaeda, which despite President Bush's fulminations always has been a bit player in the insurgency.

Three years and nine months into the war, another grim milestone has been passed with the 25,000th American casuality. At the present rate, the U.S. death toll will exceed 3,000 early in January.

Three years and nine months into the war, the effort to win the hearts and minds of Baghdad residents by restoring and keeping crucial municipal services is an unmitigated disaster. Some neighborhoods in the capital are the equivalent of the South Bronx in the 1970s and police and coalition troops dare not tread there. Most of the capital is in perpetual darkness because insurgents control the power grid. There's also a shortage of drinkable water.

Three years and nine months into the war, the government of Prime Minister Nuri Al-Maliki totters on the verge of collapse. When he convened a reconciliation conference over the weekend to discuss how to stem the unrelenting bloodshed, no representatives of Shiite or Sunni extremist groups attended. No representatives of insurgent groups attended. No new ideas were presented.

Three years and nine months into the war, there is a paucity of ideas about how to attain President Bush's goal of "victory" because that goal is no longer attainable. From the outset, goodwill was a much more precious asset than bullets, but that commodity was long ago squandered. Now no amount of bullets will win the day, which the Joint Chiefs of Staff acknowledge by unanimously agreeing that no more troops should be committed because the White House continues to fail to define the mission.

Three years and nine months into the war . . .
Posted by Shaun Mullen at 9:35 AM
Email ThisBlogThis!Share to TwitterShare to FacebookShare to Pinterest