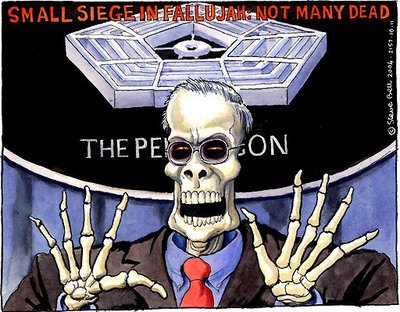 One sign of the dysfunction of the Bush White House is the embarrassing leaks emanating from it as The Mess in Mesopotamia devolves into chaos and The Decider becomes still more isolated.

The latest leak is a memo by outgoing Defense Secretary Rumsfeld acknowledging the failure of the war policy and offering new options that he wrote two days before his surprise ouster.

While the memo is an interesting glimpse into the mind of a man who knows failure when he sees it, too much is being made of its significance. Rumsfeld is famous for his "snowflakes," as they are called, lengthy and rambling memos packed with ideas that like snowflakes float down from the secretary's office to the Pentagon and White House bureaucracies.

It is intructive to note that one of Rumsfeld's alternative strategy proposals mirrors one made by Rep. John Murtha that was vilified by the White House at the time: Redeploying troops to Kuwait or safer areas of Iraq where they would act as a quick reaction force.


* * * * *
I do not claim to understand the Bush pathology. In fact, the more I think I understand it the less I do. This stems from a pretty basic set of forces: I am able to listen, adjust my parameters as they need to be adjusted, and so on and so forth. I naturally want to apply my behaviors to The Decider, but they don't. He has proven time and again to be incapable of listening to reason.

The drumbeat of bad news over the last couple of years in Iraq, now including Rumsfeld acknowledging the bankruptcy of his war policy, as well as the loss of his already frail mandate in the election, has had no discernible impact on The Decider. He seems not to understand that as the emperor he has no clothes. I can only surmise that from his deeply self-centered perspective, allowing events and outcomes to have an impact on himself and his policy is to admit that he is weak. This is the point of view of a man who never finished growing up and clings to his adolescent insecurities while thumping his chest and desperately trying to appear strong.

As I wrote a couple of days ago, with the Iraq carousel spinning ever faster, this would have been an opportune time for The Decider to take a deep breath, step back and consider the precious few options that he has left open before the U.S. is routed in Iraq. Instead he draws a big, ugly line in the sand and says anything short of victory in unacceptable.

The Decider equates being strong with being unwavering. As we know, all great leaders (Churchill and FDR come to mind) are both determined and open to change. The Decider is not only not a great leader, he has proven himself to be a terrible one.