The Crisis in American Nursing. Stat! 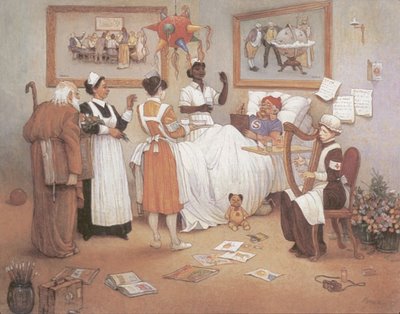 As anyone who has spent any time in a hospital knows, it's the nurses who make things work.

That said, the nursing profession is in crisis, which tends to get overlooked in discussions about the U.S. health-care system, which also is in crisis.

Many nurses are asked to work unreasonably long hours and mandatory overtime. The number of patients for whom nurses are responsible during a shift has increased dramatically. Few nurses have medical benefits. (Ironic, isn't it.) Many nurses are burning out and leaving the profession, but not enough new nurses are being graduated to make up the deficit.

I know the paramters of the crisis better than most people. I've spent more time than I care to recall visiting family and friends in hospitals in recent year. A while back I had a boo-boo myself and was on the receiving end of (top-notch) nursing care for a few days.

But the biggest reason that I'm so tuned in is that I have an excellent source -- the Dear Friend & Conscience, otherwise known as my companion, girlfriend, whatever.

The DF&C has been a registered nurse for 28 years. She has worked in a variety of clinical settings in several states and overseas, and is board certified in emergency and critical care. She currently works in the New York metropolitan area and is being certified to become a legal nurse consultant.

We recently engaged in a Q&A on the health-care crisis with the focus on how nurses are affected.

Q: How has health care changed in the last three decades?

A: There have been incredible advances in treatment, but access to data on those advances -- let alone the advances themselves -- is becoming more difficult.

A: Access varies from state to state and region to region, including urban and rural areas, and whether you are well to do or poor. The access issue is exacerbated by confusion over changes in Medicare.

Additionally, the Bush administration has been determined to provide data based on its politics, not medical science. This includes stem cell research, medical marijuana, birth control and vaccinations.

Q: So access to unfiltered information is essential before you can even talk about patient care, let alone whether there are insurers who will pay for that care.

A: That's right. The problem with insurers is so basic that there is widespread confusion over who they even are.

Let me give you an example: Is an insurer employer-based? Is it a self-pay insurer? Is is it a state- or federal-based insurer? Are you a veteran and have a status that would permit you access to a different health-care system? Does whether you are married or unmarried matter? What is your point of access to the health-care system?

That's pretty vast and determines what kind of care you are eligible for or whether you can get care at all. It's a minefield.

Q: Let's look at another part of the equation. With the exception of certain government programs, virtually all providers -- whether they are hospital corporations or universities -- are in business to make money. How does that affect the quality and availability of care, as well as nurses themselves?

A: First of all, there has been a huge change in the health-care industry, and it has become an industry.

Beginning in the late 1970s, major for-profit corporations began to experiment with ways to make more money from health care as they bought up community hospitals. They increased their profit margins several ways, although primarily by decreasing hospital staff. This included eliminating LPNs and nurses aides, and in many instances housekeeping staff, transport staff and laboratory technicians.

They then shifted increased responsibily for all of those positions onto nurses. That's called exploitation.

If a bed needed cleaning or changing, a nurse would have to put on gloves and use heavy-duty cleaning agents in between transfusing patients, changing bandages, medicating for pain, consulting with doctors, dealing with the pharmacy, interacting with patient's families -- the core responsibilities of nurses.

Q: Has the quality of care suffered as a result?

A: Not necessarily, but the burden on nurses has been awful. This is why there is a severe nursing shortage, which is a big part of the health-care crisis.

More nurses are burning out earlier and fewer people are entering the profession, and so the pool of experienced, street-smart nurses is diminishing and is not being replaced as rapidly as it is being depleted.

There is a nearly complete disconnect: Nurses cannot survive the hours. They cannot survive their employers. They cannot afford to live in the very communities where many hospitals are located. They are not part of the equation except when it comes to liability. What I mean is that they're liable no matter where the breakdown may be in the treatment chain.

Additionally, compared to doctors and other professionals, nurses as a group have been very slow to organize.

A: Because they are taught in nursing schools to bend over and take it up the ---.

There's very little education for the nurse, if any, as far as her relationship to the hospital as an employer. The result is that the nurse is expolited and a consequence of that is the nursing shortage.

A big reason why most nurses are women is that most men simply won't put up with that kind of work environment. Male nurses usually come from another career background when they enter nursing and have the additional skills that put them at more of a career advantage because they have a better feel for the business side of nursing and quickly move on to supervisory positions.

Q: Is there any hope of things getting better for nurses?

A: I suspect that their pay will go up. But things will not get better insofar as their professional standing, exposure to liability because of screw-ups elsewhere in the system, fringe benefits, eligibility for tax deductions, and so on.

You'd better believe that they'll still be on the firing line.

(Painting by Jose S. Perez)
Posted by Shaun Mullen at 6:12 AM
Email ThisBlogThis!Share to TwitterShare to FacebookShare to Pinterest

Careful Shaun, never mix a reference to your significant other, and the word "whatever", you'll end up sleeping on the couch!

You're quite right, although the "whatever" reference was to my disdain for labels, most certainly not the DF&C.

Interesting Q&A. I wonder if your interviewee has ever worked in southern states?
My wife is a nurse and I'm putting her through CRNA school now. She's only been in the profession 6 years, all ICU BTW. She knew being on the floor was not going to last long, I think the average is around 10 yrs.
Much of what was said here seems to be what I heard as well.
Though both places she has worked were non-profit, and it appears from others we've spoken to that is the way to go. For Profits treat employees much worse.
All we've known have health insurance, and decent pay. I think this may be a southern thing, because there were no unions and her pay was roughly $8/hr higher than those in MO and KS.
The biggest thing I saw as a problem was nurses being blamed for poor decisions by mgmt and Doctors.

Ah yes, the blame game. No matter how many people are involved in a patient's care -- the pharmacist, radiologist, therapist, psychologist, resident, intern, primary-care doctor -- the buck begins and ends with the nurse and when something goes wrong the nurse often is in the crosshairs.

Good luck to you and your wife.

After 27 years of being a nurse in the despicable LTC industry , I was fired for reporting an illegal/unethical practice by my employer. I found some protection from my whistleblowing activity under a law that protects healthcare workers who are fired /discilpined in retaliation for reporting.These laws are state laws that get heard in a hearing in front of an Administrative Law Judge who has sole authority to find in your favor or dismiss your case. No jury, no punitive damages, only relief is reinstatment with backpay IF you win . I lost my case heard by an ALJ who completely erred in interpretation of our state law.Now I am in the appeal process, will go all the way to the supreme court if need be.Nurses are now being coerced into falsifying documentation to allow their employer to get away with hiding information that would need to be reported to the oversight agencies.Also, in my state a nurse is being charged with criminal negligence by the DOJ.The healthcare industry is being allowed to get away with many, many violations by the state regulating agencies, yet the nurse is now being punished for the sins of the healthcare corporations. A nurse named Mary Richards Rollins RN,BSN,a former state examiner, wrote an expose about just how underhanded and corrupt the oversight agencies are. Nurses are in a world of trouble and this does not bode well for their patients, esecially with the baby boomers coming ofage just around the corner.

Sadly, your story is familiar, and other nurses who put their careers on the line are getting crushed like bugs. Please hang in there!

Excellent post. I encourage you to submit it to Change of Shift, the nursing blog carnival published every two weeks. It is a carnival about nursing, by nurses and others. The next edition will be published tomorrow, and deadline for submission is 5pm EST today. To submit, email the URL for this post to this edition's host: airwaycontrol at protecttheairway dot com.

Change of Shift was started by Kim McAllister, R.N., of Emergiblog, and the schedule/archives for the carnival is maintained by her. Her blog is at www.emergiblog.com.