The 109th: A Congress That Will Live in Infamy 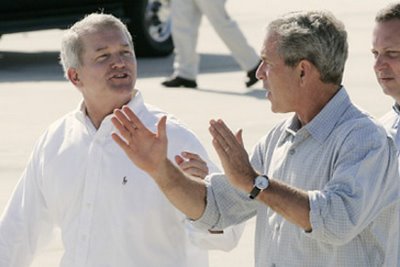 I never gave a thought to blogging about the closing days of the infamous 109th Congress, the circus of nincompoops, halfwits, swindlers and prevaricators that folded its tents and left Washington with a final whimpering bang on Friday.

But oh what a bang!

Needless to say, no one will be reprimanded.

I would leave it at that, but Justin Rood has written a divine tribute to the 109th over at TPM Muckraker that with the Ethics Committee ruling takes on an added pungence.

"You did only manage to stumble in to work 218 days over the past two years. And your inbox certainly piled up: there's all that intelligence you never questioned, a sprawling disaster of a war you didn't oversee, and of course the largest, most complex government budget in the history of the world, which you failed to rein in -- this year, you didn't even complete it. "And some of you simply lacked the credibility to do your jobs. Like the intelligence chairman who hunted for WMDs in even after the most ardent WMD-believers in the administration had given up the ghost. Or the most senior lawmaker for environmental issues who insists global warming proponents are brainwashers. . . . "A whopping 19 members offered yourselves up for federal investigation! And what goodies you showered us with along the way: The fake charities, the cash in the freezer, the IM chats, the bribe menu, the FBI raids (oh, the raids!). And the hooker rumors, the sudden trips to rehab, the junkets to forced-abortion sweatshop islands, the 'prosecutors have assured me I am not a target of any investigations'-s. When is a fundraiser not a fundraiser? You pondered this kind of question. You used your wives to take money you couldn't. And we'll treasure forever your many, many, many, many, many resignations!"